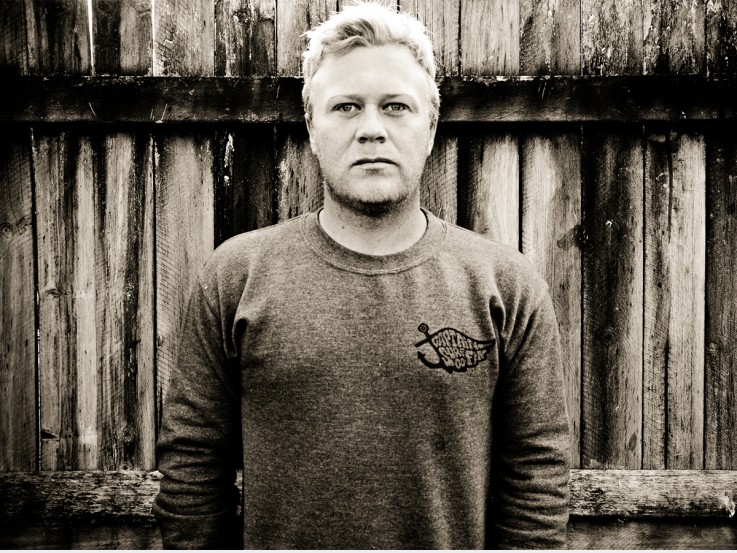 When did you get your first surfboard?
I was living in Sydney and my dad, who had stopped surfing for a little while, caught up with an old neighbour of ours and they pulled some old boards out and telling me some stories. I remember it was at that time that I decided that I was going to be a surfer. The following day I pulled a board out from under my uncle’s house and decided that it was just going to be mine.

Was it a classic board?
It was a bit of a pig. It was an Aloha, I know that much and it didn't last very long. It met its demise in a shorey at Mooloolaba shortly after. I was then stuck with a bodyboard for a while until I found a board under a friend's house that was absolutely destroyed, I paid five dollars for the leg rope that was on it and I made dad spend the following months fixing it for me...

What do you love most about surfing?
I think it's just addictive. You just can't switch it off. It's not like you go and play tennis and then you go home and you just think about tennis. Maybe it is that way for tennis players, but I think for me it's just everything. Everything you do in life kind of ties back into surfing.

Do you have one wave that sticks in your mind as being your most memorable?
There's probably a couple. There's one at Freshwater in Sydney actually just after I learned to surf, it was the first wave that I actually started to trim across it. I remember that one like it was yesterday. Then there was a wave I caught at Cylinders on North Straddie that barrelled three times, and there are few memorable ones at Snapper I’ve had as well.

Have you done much travelling?
I used to work with Tracks and Waves magazines, so I did a little travelling with them to Hawaii, South Africa, Indonesia, New Zealand and Europe.

Any place in particular stands out?
Indonesia for sure. Hawaii is probably my favourite place to go, but I've been lucky enough to do two exploration trips to Indonesia where we explored some uncharted territory and we found some new waves and we really scored. So, it’s hard to go past Indo.

What was your very first job?
My first job was when I was 14 at BI-LO Supermarket. I was the fruit and veg night manager. My job basically required me to keep the fruit flies away from the fruit and spray water over all the apples and carrots to make them look nice and attractive.

What education have you had?
I studied a diploma of journalism by correspondence. At the time I knew I wanted to work at a surfing magazine and I had spoken to Sean Doherty at Tracks about how to go about it. I was doing bits and pieces for him for free and then I decided to do some correspondence study and get a certificate, while I was on a building site.

So you were a tradie for a while?
Yeah. I was just basically just labouring for the money. I was smuggling my laptop onto a building site in my esky and while I was supposed to be sweeping floors, I was doing assignments.

How did you get your break into the surf mags?
While I was studying I would write my assignments based around something that I thought I could also send to a magazine. Whether it was for feedback or just to offer it to them for free; anything to try to get them published. I contacted Gold Coast Surf, a local free magazine, and I picked up some freelance work with those guys. Again, it was just pro bono type stuff, doing some interviews and whatnot, which got me my first tear sheets at least.

From there I lucked into a job. I'd started doing freelance at that stage, paid freelance with Tracks magazine, Fiji Today and another paper over there plus a few other things. Then a job came up at Tracks so I made the move from the Gold Coast to Sydney for that.

Tell me about your jobs at Tracks?
I was staff writer and editorial coordinator so it's just basically bits of everything really. I did that for two years before I moved across to Waves as their Deputy Editor.

How long were you at Waves for?
I was there full-time as the Dep. Ed. for a year before I moved to Surfing Queensland.

Tell me a bit about your job at Surfing Queensland?
I'm the Events and Communications Manager, which essentially means that I work in the events team and help to manage surfing events, but I also run the media here as well.

It's definitely different to magazines, which is what I was looking for. Just a change in pace. This job was attractive to me because it involves the development of the sport of surfing. I had spent a lot of time travelling with pro surfers who are already cemented in the surfing world, but in this job I get a chance to be involved with these guys from a much younger age and watch them come through the ranks.

And what does your job involve on a day to day basis?
It can be anything from reporting or applying for funding because we're a not-for-profit organization, to dealing with or doing interviews with newspaper journalists, TV, radio or even liaising with politicians. I think that's another thing I like about the job - that it changes so much everyday and it's definitely not monotonous.

What sort of events does Surfing Queensland put on?
We do everything from your local grommet contests all the way through to the Quiksilver and Roxy Pro’s, which are the first stop on the ASP World Tour.

We have our own WQS event, the Breaka Burleigh Pro, which has a men's and women's component and we also have a Queensland Championship Circuit, which is a point-based four-event circuit and the top two surfers win wildcards into the Quiksilver Pro trials.

What do you like most about your job?
Everyday it's a little bit different. One day I can be in the office plugging away doing a report, the next I'm standing behind a camera on the beach shooting some of the best surfers in the world. That's probably what I like the most about it.

What's it like working at Surfing Queensland?
It's pretty small, there are only seven of us, six here in the Gold Coast office and another on the Sunshine Coast. Because it's a not-for-profit we all get busy, but the beauty is, here, it's one in, all in. Everybody just gets in and it's all for the greater good.

I imagine you don't get to travel quite as much in this role?
Not internationally. So that was a bit of a reality check. A big change from the magazine world, we do travel a lot but mostly through Queensland. We just did a big trip up to North Queensland, which was really good. I actually didn't even know there were waves that good up there. At Agnes Water there's a point there and I think we just lucked into a swell up there and had a great week.

Was there anyone that inspired you in your career when you were growing up?
Definitely. Like most kids, surfing magazines were my bible when I was at school. Just like the surfers in the magazines I think I took it a little bit further and started studying the people behind the photos and the words as well and I definitely felt a connection with Sean Doherty’s work. I looked up to him a lot and he inspired me a lot. I just wanted to do what he was doing. Even now he's travelling the world commentating and writing and still making a living out of it.

Have you got any advice for people trying to get into the surf industry?
Just based on my experience, I think you've got to be prepared to do some things for free just to gain some experience. Don't be put off if people just say no to you. It is a hard nut to crack, but if you're prepared to do things just off your own back for the experience, the relationships you make throughout that period will be really beneficial to you later on. If a job ever comes up you'll be the first one on their mind.