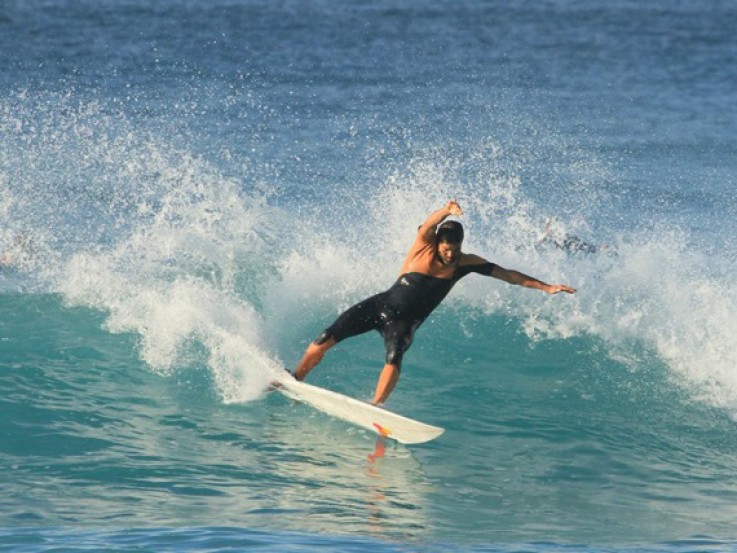 Derek Rielly
When and where did you start surfing?
I was 12, but shackled to a suburb half an hour from the beach in Perth. My legs became strong from much bicycling, lungs sore from hollering at my parents, and, later, my thumb well-muscled from hitch-hiking. It was hell, pretty much, when all you want to do is surf and you know it's going to be onshore by eight am (this is Perth, right) and you know you're going to either miss it or arrive just before the south-wester hits. But all this deprivation did build a great store of love for the sport that is yet to disappear.
What is it that you love about surfing?
I love the highs of feeling superhuman and of being removed from the grind of a populace who spend their weekends trawling cafes and department stores. I love being connected with friends I otherwise wouldn't see. I love being immersed in the cycles of weather.
What kind of education have you had?
A few hits at university, film and television, biz, and arts with a double major in literature/journalism.
How did you kick off your career in Surf Journalism?
A real nice American man called Mike Perry advertised for an associate editor of ASL when I was slinging cards at Jupiter's Casino. I saw it during a break from the blackjack table, stole a few stories from old issues of Tracks, wrote a fine letter and got the gig.
How did the idea for Stab Mag come about, and how did you go about building a name in a tough/flooded market?
A pal and me were working at emap together and we saw the rivers of gold pouring into their biz. We wanted some. I could write(ish) and edit, Sam had impeccable connections among pro surfers (and was driven as all hell) and it was at the time when the surf industry was peaking. Good ideas and spending money, I think, was the key to our rapid ascent. When I was at ASL I had 10-gees a year to spend on travel, photographers etc; at Stab we'd cut off a piece like that for one shoot.
Where does Stab fit in the lineup of Surf Publications? What is the intended voice?
The voice was never completely serious and definitely not pious. It was meant to be like surfing, breezy as hell with moments of greatness.
Who/ what has inspired you and the work you do?
I like writers who fear nothing and who challenge prevailing orthodoxies, even if I mostly disagree. Gavin McInnes (creator of Vice now on takimag.com) impresses me.
You're also one of the brains behind Beachgrit with Charlie Smith and Morgan Maassen. How did that come about and what is the philosophy behind the site?
It's the step I wanted to take at Stab but didn't feel like it quite fitted the brand. I want BeachGrit to be completely anti-depressive and fast-flowing and devoted to the cause of Being Awesome.
What is it that you love about your job?
I love everything! Print did start to get stale, however. You write a story over the course of a week. It takes another week or three to get designed. It gets sent to the printer. A few days later proofs come back. You check and send 'em back. The printed issue arrives a month later. Two weeks after that it hits the stand. You hear nothing. Online, you write and you're given instant feedback. Typos? Dive into the back end and fix. New information? Slice it in. I've never felt this awesome about writing.
Do you have any advice for any aspiring surf publishers/ writers out there?
Don't be afraid to pick up the phone. All the websites do is recycle clips and press releases. Maybe one or two of us dial numbers.
What does the future of surf media hold for us?
Online.