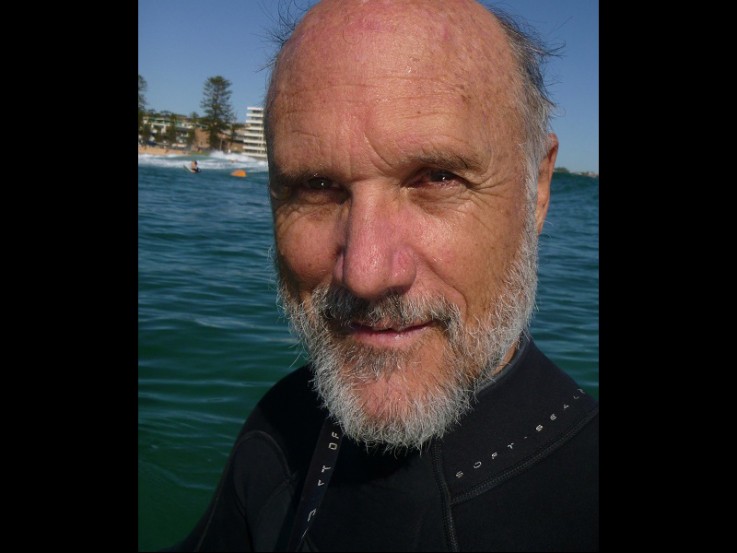 When did you first start surfing and get your first board?
I started in 1969, and got my first surfboard in Honolulu - about 24 hours after landing there. I’d been with my family in Australia then had come back to take a summer job and was determined to become a surfer. I was 17 and when I got to Hawaii I had my Aunty drive me into town to a surf shop and pick out a board with no knowledge at all. It was a Gordon and Smith 7’4. After 2 months there I went back home to California where the water was a bit colder and learned to surf. It took a while.

How long until you became a competent surfer?
I kept at it. Like anybody, after that first wobbly stand up and falling off you’re hooked.  I was certainly able to get myself into trouble after about 4 or 5 months. I got back to California just before the winter of 69, which turned out to be the biggest winter in decades. We had huge swell from December onward. And I would manfully paddle out in surf that I wouldn’t paddle out in today.

What is your go to board
It’s a pop out 7s fish. It’s one of those rare boards where the first time I took off on it I was like “whoa, this is fun.” Most boards have a trial phase where you’re still getting used to it or deciding, but this was one where I knew I loved it from the first day, and knew how it would ride straight away.

Have you had much surf travel experience?
I moved to Australia in 1984 and the only trip I’d ever made to surf prior to this was in 1977 when I came to Australia as part of a project to surf and shoot a movie. I got about an hour of great footage, and some of that was of Michael Peterson at Kirra and Winkipop. That was my big trip. A friend of mine who helped out on the movie back in 1977 has been back to Oz every other year since and the two of us always go on surfari up the north coast.

What sort of education have you had?
I’ve got a degree in English; a BA from UCSB in Santa Barbara where I grew up.

What was your first job?
Gardening when I was about 8.

What direction did your career take?
My career has become a career in retrospect. I look back and realize ‘Oh, that’s my career!’  I basically worked my way through university, then my wife and I worked for a bit, then came down to Australia. I worked briefly as a typesetter before getting a job editing a HI-FI mag. That was in about ‘85 and ever since I’ve been earning a living mostly from editing and writing.

What I take away from my career is that you have to really work towards whatever it is that you want to do. I figured out early on that I wanted to do something in publishing and writing. I had a job at a printing plant, then from there I did some scanning work, worked in an art department and learned typesetting. I wouldn’t even look at jobs that weren’t related to what I wanted to do. I just wanted to be in the neighbourhood. Don’t worry about not getting the job you want straight away, try and get into things that may be logically related to the kind of work you want to end up doing. Look for work that is vaguely connected to where you want to go basically. I just did that. When the Hi-Fi magazine went under, I decided to become a freelance writer from about 1990. I’m still doing that, and I’m also currently editor of a photography magazine called Photo Review Australia.

How did RealSurf begin?
I started back in 1995, I was still working in the trade as a typesetter and kind of figured that I wanted to learn about this HTML stuff. So I figured I would learn from making my own website. And because I lived near the beach, I thought it would be useful to other surfers and beach-goers if I went and looked at the beach then put something online - to potentially save them a trip to check it out. I’ve been a conservationist for years and have followed the climate change issue since the 1980’s, becoming increasingly concerned about it. Being an old guy I have a lot of mottos. One of them is ‘ I’m at least a 7 billionth of the world’s problems, but if I work hard and get creative I can be a lot more than a 7 billionth of a solution.’ So I figured that if I saved at least 10 trips a week to the beach by other people, that it would cancel out my own greenhouse gas output. The idea just seemed practical and functional and something that would leave the world a little bit better off. My love of surfing, and conservation and desire to learn is really what got me started.

Does it take up much of your time?
I guess you would define it as a hobby because I don’t make much money from it. There have been a few years where I have, but they’re rare. I didn’t do it to make money as such. I spend roughly a day on the site over a week.  Just maintaining the website, taking photos, writing reports etc.

What do you love about it?
The buzz for me is that people are benefiting from what I do, and people love it. On a given a day at least a couple of thousand people will visit the page and the forums. It’s cool, just doing something that people like and giving something back. It’s personally rewarding.

What does the future hold for the RealSurf venture?
I want to leverage it for the audience, not for me. I always have this or that idea for the site in the back of my mind. It’s fun knowing that there’s a couple of thousand people a day who see my new ideas and react to them in different ways. More immediately, we’re halfway through a crowd funding drive* in order to re-furbish the site from the front end, and just to clear up and better manage the back end. I do everything for the site then every once in a while I hire some guys to give me a hand, and that’s what I need at the moment. Some guys who can fix it all up so much faster and better than I can. Another thing I am focusing on right now is making the site more mobile friendly and compatible than it currently is, and also developing an app.

*Our crowdfunding effort succeeded and now I have the “problem” of using the $ raised as efficiently as possible to re-vamp the site.

Do you get out in the water much these days?
Once I became a surfer it soon dawned on me that I would need to get my employers trained properly to accept that I needed to surf when there are waves. So, I would work hard and be as creative and reliable as possible, but in exchange, I needed them to realize that if the swell popped up I would, er, need the scope to decide when I’d be getting into work! It’s a lot easier now that I work for myself. Depending on the season I probably get in the water about 2-3 times a week.