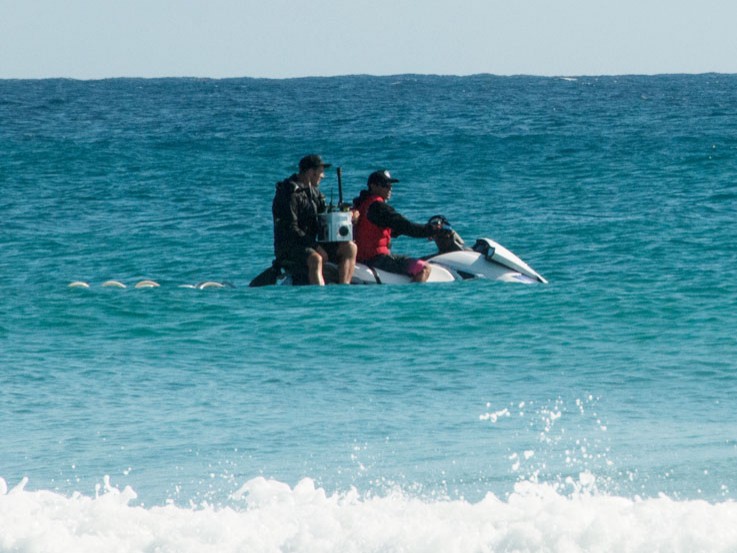 We were up at the Gold Coast, enjoying the Quicksilver and Roxy Pro Competition. Glyndyn had been out in the jetski during the last few heats. We took a moment between heats and grabbed a sit to chat about his life and his career: an exciting combination of professional surfing, shaping, surf coaching and passion for the surf lifestyle.

Where did you grow up?

I was born in Vanuatu and then we moved to Fiji and the Solomon Islands. My dad is a practical missionary so I ended up travelling and living in remote areas, in Fiji he was working in dairy farming and then coconut farming in Vanuatu.

Where did you surf for the first time?

I swam in waves for the first time in Fiji and I absolutely loved it. The first real surfing experience was in the Solomon Islands. We had dugout canoes and used to catch the wind chop. As soon as I moved to Australia and saw pictures of surfers and surfing, I knew I had to do it!

How old were you when you moved to Australia?

I was 11. I was in Port Macquarie until I was about 16 and moved to Newcastle first and then to Phillip Island.

How did you end up in Phillip Island?

I had a friend from Phillip Island when I was living in Port Macquarie who was travelling and hung out with us and was a pretty good surfer. So when I went to Philip Island, I hung out with him and his family.  The Island had a lot more variety of waves and was a good opportunity to have a lot of surfing fun.

Do you remember your first surfboard?

The first one I bought was a thruster. I worked really hard to get it sweeping floors at an engineering factory. It was a good board, but my brother borrowed it while I was at school ended up trashing it. Before that I was just riding boards from the tip, single fins and also borrowed boards.

What was your first job?

The first job was sweeping floors at the engineering factory after school. However dad always wanted for me to learn mechanics. So I started doing a pre-apprenticeship at Avondale College, and that led me to a mechanical apprenticeship at Phillip Island.  I spent a year working at that workshop, until they fired me because I was spending more time in the ocean than working! I was pretty devastated at the time but it ended up working really well. I started a part-time job in a garage, servicing the cars and worked for a surf shop after that. That’s how I got in the surfing industry and I haven’t left it ever since.

How did you get into competitive surfing?

I guess it all started when I was living in Phillip Island. I joined the board riders and then got into state rounds. I seemed to do quite well in the state rounds so I gave the Aussie titles a go. Then I competed in the Australian Championship circuit. It was a slow progression.

Then I started on the ACC and managed to win a few events and get a good position in most of them. And that just led me on to the Tour. I ended up getting the 3rd on the ACC Circuit, which gave me the chance to get into the WQS. I spent 3 years on the QS and then I qualified to do 2 years in the WCT. After that I did a couple more years on the QS and finally decided I wanted to do something else instead.  I kept competing every now and again, but just for fun.

How tough was it financially on the tour back then?

It was pretty tough financially wise because even though I had sponsors, they only gave me $3000. That’s all I had to travel the world.

Despite that, it was a great time of my life, surfing and organizing myself to get to the next place!

How did you manage working and touring?

I was shaping while I was on tour. I think I was the only person that was going away on tour, coming back and getting into a full time job. I used to get back from tour and go straight back into the surf coaching, shaping surfboards, and in-store work. I was blessed to have a boss that was happy for me to work on and off. In exchange, I was promoting the shop while on tour.

Are you still involved in the same surf shop?

That’s right. I still work for Islands Surfboards on Phillip Island. My role there is mainly shaping and also a bit of in-store on Sundays. I usually greet people, take orders and help around in general. I also do a bit of surf coaching on the side.

Do you use machines or is it all hand shaped?

We have just bought a machine. I was already doing some designing, but it was pretty hard to be productive and cost-effective at the same time. So having a machine helping has been awesome, you get better boards and quicker. In the last couple of months it has been very busy.

How is the shop going with the competition of the major online stores?

Our clientele is very local based, plus a lot of our stuff goes to Tasmania and South Australia. The quality of our job is well known, and there are also the friendships I’ve made along the way, the connections of connections, etc. We are selling a bit online too but not a lot. I can see that it will probably affect us more down the track, but the thing is, we give genuine service.

We are pretty old school still: people can come into the shop, meet the shaper, organize a board. We can even take pictures and send them to the client, and that’s something they appreciate. We are more like the local surf shop style, like it used to be, and we would like to keep it that way.

We still do get stuff done and cut in China (we have been doing for the last 8-10 years) and sell it through our surf shop to give us the different price points. We also manufacture boards locally.

You are out in the water with your jet ski in surfing events like the Gold Coast Quicksilver Pro.  How did you get involved in that?

I met Rod Brookes and a few other people from Quicksilver while competing on the WQS.  They knew I had a jet ski, so they asked me if I would be keen to go out there during competition. So now I work on the Quiksilver Pro Gold Coast, Rip Curl Pro Bells Beach and Fiji Pro, I’m working the camera ski at this event (Quik Pro).

The latest Shapers Salary Survey brought to you by AKU Shaper and Shaperbuddy is completed, download the results by entering your details in the form below.