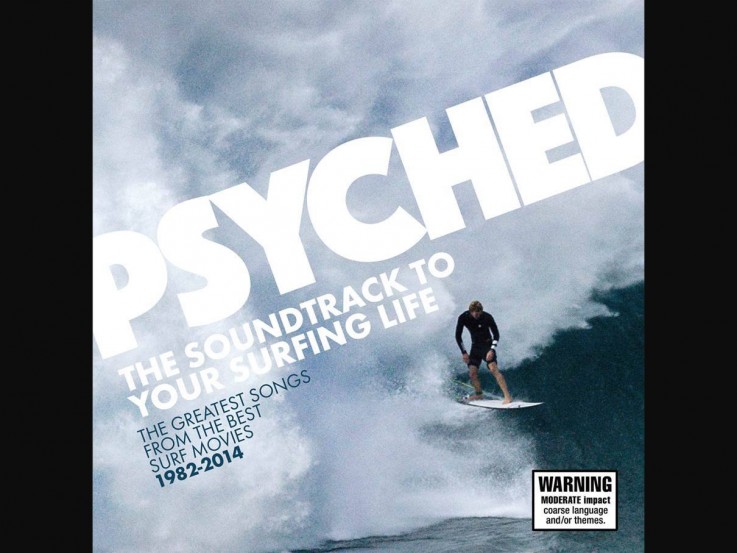 Psyched: The Soundtrack to your Surfing Life

When did you get your first surfboard?
I got my first board when I was 10 years old, so 37 years ago.  It was a Hayden 5’4 single fin. I was living on the Sunshine Coast and my old man got it for me for my birthday.  I remember I very quickly traded it in for a 4’11 twin fin.  Dad assured me I’d become a better surfer if Ii learned on the single fin, but the twin fin seemed so much more fun. He wasn’t too happy when I came home with it.

What is it that you love about surfing?
The best way to describe it is that it is the one place where my mind stops. When I’m actually riding a wave I’m not thinking about anything else other than riding that wave. That’s something I yearn for, as I get older.

Do you have any memorable sessions?
My most memorable session would have to be at Peniche in Portugal when I was 21 I spent a few weeks camping at Supertubes and there was this one day that was the biggest I have ever rode, and the best I’ve ever surfed.  It all happened that day.

What’s your go-to board at the moment?
I ride a McCoy 6’6 nugget at the moment that is my absolute pride and joy.

Education?
I left school at 15 to go and sing in punk rock bands. Up until that time I was a competitive surfer, surfed in the north shore board riders, was sponsored and that was my life before punk rock took over. I found myself immersed in music and have been so ever since.

Were you working at the time?
I was working at Good Times surf shop at the time in Woolongabba, and for my old man at his insurance brokerage. I did the music thing without actually getting paid until I was 24 when I finally got a job working for Polygram records in Brisbane, and I have been gainfully employed in the music industry ever since.

What kind of roles have you held?
Up until 5 years ago I had worked at record labels in Australia and have done everything you could imagine. I started out on the sales desk and ended up running marketing and publicity departments, then 5 years ago started my own company - Footstomp.

Can you tell us a little bit about Footstomp?
We do a bit of everything; Publicity, management, events and all kinds of things. In this day and age in music, I think that’s the key., you need to be adaptable so that you can survive. My goal was always hoping that after the first 5 years that the fun bits would be bringing  in the money, and I’m happy to say that is the case.

How do you merge your love of surfing and music?
I’ve always tried to work out ways to put the two together, and it’s only been relatively recently that it’s made true sense. I did the music for the World Surf League Awards this year and I’d had this idea for years to do a The Soundtrack to Your Surfing Life.  Being an independent label with Warner Music I was able to present them with the idea for Psyched. The attraction of surfing and music is that they have both always been the home for outsiders. They are places where those who don’t always fit into society have found a place to thrive and survive.

How big is the company?
There’s 3 full time staff. I could grow the company but that would take me further away from the music. My aim is to keep us a powering small business.

Are any of the artists surfers?
Yeah, we have surfers on the roster, we co-manage Ash Grunwald for one, I worked with guys in the past who have been quite passionate surfers like the rhythm guys from The Living End for example.

Is there anybody who you see as a mentor or inspiration?
Yeah, there’s quite a few. John Zuko, who also happens to be my closest friend, is somebody I met when I was 14. He took me under his wing and taught me lots of good (and bad) habits. I met him through surfing and he introduced me to a lot of good music. He got me my first job interview for my first music job.

What is it that you love most about your work?
I love that every day can be completely different and hilarious. Just yesterday I had a meeting with my team going through some of our challenges and having a laugh about them. Just looking through my e-mails now I see an e-mail with the subject ‘sex on toast’.

Do you see yourself running Footstomp in the coming years?
Yeah, this is it for me, I’ll do this for as long as I live. Nobody can sack me other than myself. I can age disgracefully and remain employed!

So PSYCHED. How did you go about choosing the tracks?
It was originally about the idea of surfing being both an extreme sport and a spiritual pursuit. This particular compilation is about representing the extreme sport side and representing the beginning of the home video age of surf movies, so from the early 80’s onwards. Tim Baker and myself worked together on putting it together and choosing the songs. We had a very big list of songs that we took to Warner. They thought that we’d never get guys like Midnight Oil to license to a compilation, but I think that the idea of this compilation made these guys jump at the chance to be involved. We got 95% of the guys we were after.

Do you have a favourite track?
Probably Tunnel of Love by the Sunnyboys. It reminds me of those years growing up on the Sunshine Coast.

Do you have a favourite surf movie?
It would have to be Fly in the Champagne. I’m very obsessed with rivalries in sport and the Andy v Kelly rivalry is such an intriguing story. I think I’ve watched it about 20 times.

Do you have any tips for people looking to get involved in the music industry?
If you want to work in music in a position off the stage, then you really need to remind yourself of that fact. It’s not about you, it’s about the artists that you’re representing. If the guys behind the scenes are doing a great job then they will be remaining invisible and remaining humble. I’ve come across a lot of people who get involved in the music industry looking to get that same feeling as the guys on stage. It’s not like that, you need to make a choice between being one or the other.