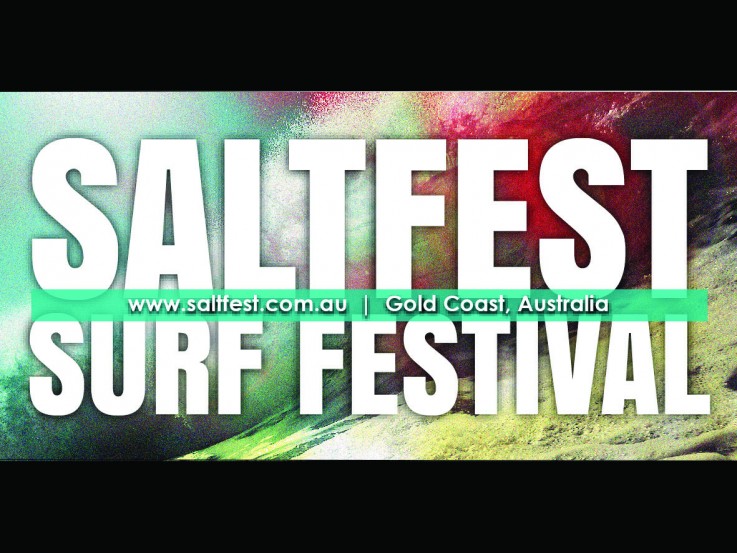 Saltfest is a unique surf festival and the inaugural, free event will be held at Coolangatta on the Gold Coast, at the start of March, coinciding with the Quiksilver Pro. The event, which celebrates everything about surfing and the beach culture associated with the Gold Coast, will showcase more than 80 vendors including the likes of shapers, designers, musicians, photographers, artists, retailers and food stalls.

The concept for the festival was literally thrown together over Christmas by husband and wife team, Ryan Johnstone and Michelle Sonter. Ryan is a qualified and practising lawyer, has completed a Diploma in Project Management and Real Estate Certificate, has tried his hand at carpentry, deep sea diving and has owned and operated a café in Japan. Michelle started her career as a fashion designer and has worked for the big surf brands, including Billabong and Dickies Australia. She now runs her own freelance graphic and web design agency. So what spurred the pair on to deviate from their ‘real jobs’ to create Saltfest?

Firstly, why a surf festival, hasn’t it already been done on the coast?

“It has but we wanted to do it differently - we chose to start with the grassroots surf industry because there was such a huge gap in the market here,” says Ryan. “We’ve lived in London and have been to a lot of major cities in the world – you go to any events in Europe and they’re amazing. The Gold Coast just isn’t being exposed to events like that - there’s artistic flair and good products here but there’s limited forums for it, so we grabbed the space and reconfigured it into what’s become Saltfest.”

So, what makes Saltfest unique?

Ryan believes it’s because the event is diverse, different and has broad appeal. The duo has also hand picked all of their vendors to ensure quality and to support local, independent businesses. “A lot of events on the coast pigeonhole the market, we wanted Saltfest to appeal to everyone. Hopping into the water with a board doesn’t dictate surf culture – it’s about so much more. A lot of people in the water forget what made surfing, it’s not just about ripping a few turns, it’s the culture of being at the beach, who you meet, what you eat and having a good time – all of that is fundamental to a good surf culture,” he says.

For Michelle it was about creating an inclusive event that really celebrated the Gold Coast beach culture. “I love the beach and we live the beach lifestyle but surf events don’t always cater to the girls. For me it was really important to target women as well as men and we’ve got some really great vendors and supporters on board – like She Project – that are dedicated to chicks,” she says.

“It’s silly not to focus on girls, not just from a marketing perspective but to support the industry,” says Ryan. “The guys that are coming through now are encouraging chicks to get in the water – just look at all the dads on the Gold Coast pushing their daughters out onto waves. I’m stoked we went down the path to get more chicks on board and to bring in some amazing brands.”

What’s been the hardest part?

“Keeping our marriage together”, jokes Ryan. “No, actually it’s been trying to get shapers on board. We approached at least 60 or 70 different board shapers but many don’t have the marketing budgets to take part in these events – it’s really competitive out there. It’s been a tough process and we’ve physically gone out there - into surf shops and cafes - seeing people face-to-face trying to get people on board. There’s a really good vibe coming back, it was slow but it’s generating now,” says Ryan.

Michelle agrees and says, “A lot of the smaller, local shapers just make custom orders so they don’t have stock on hand to show, plus most of the shapers we spoke to were ridiculously busy,” she says. “Quite a few were interested, so fingers crossed for next year.”

What’s been the best part so far?

Ryan says, “The whole thing to be honest! But the biggest part has been meeting people who are warm, friendly and fun. Everybody involved with Saltfest is so nice, not only are they lovely people, but they’re dedicated, genuine and they believe in their product and everyone is supporting each other.”

The dynamic duo are already in planning for future events and say they’d like to do some other unusual events that are not all surf dedicated. The focus for Saltfest next year, however, will be about making it bigger and better.

“We’d like to expand, I want to see at least 100 vendors involved next year,” says Ryan. “The venue that we’ve got is unbelievable, the views are spectacular and it’s nice and central but we’ve filled it already and can’t fit anymore vendors, so for next year, if we stay at this venue, we’ll have to approach council about getting roads closed.”

Michelle says she’d like to see more board shapers involved in future events. “We need to come up with a solution where we can showcase more shapers and their wares as we want them to be a strong focus at our event,” she says.

Saltfest is taking place on Sunday 1 March 2015 from 9am to 3pm at the Kirra Hill Community and Cultural Centre, on the Gold Coast.