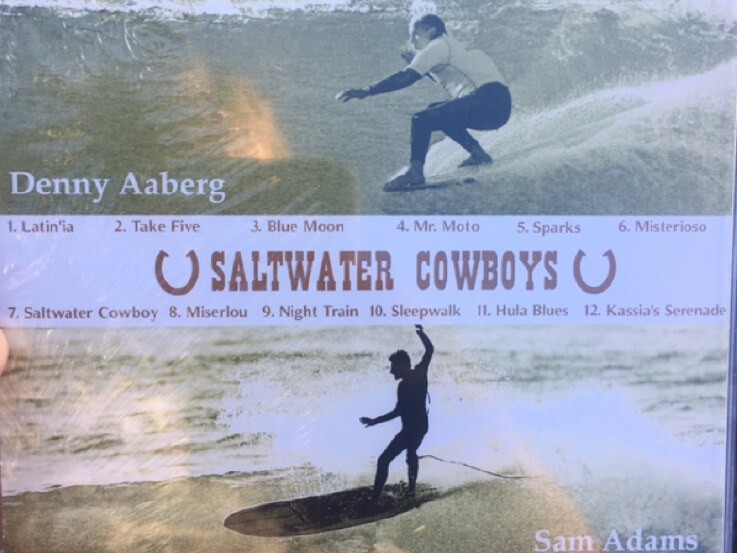 When did you get your first surfboard?

What was the feeling you had when you first stood on that surfboard?

Going right on a waist high wave at tower 26 in Santa Monica, crouched down with my hand caressing the face of the wave. It was September and the early morning waves were groomed by Santana Winds. The first rays of sun shimmering on the wave face. Unforgettable.

Describe your musical journey. How did you go from playing guitar with Lenny Kravitz to Denny Aaberg, producer of the iconic movie Big Wednesday, and the Saltwater Cowboys?

Lenny and I were best friends growing up. I started out playing Bluegrass guitar when I was 10. Then I got into KISS and Led Zep, We went to see KISS together when we were probably only 13. His mom had connections so we got to go to the after party too. I remember Gene Simmons being the nicest person I'd ever met. He stuck his tongue out for us and let us play with his pet iguana.

Lenny and I parted ways eventually, but started hanging out again later on. I played on his video Always on the Run. These days I play regularly at a number of venues in Santa Barbara and plenty local events and weddings. I play mostly classical, Brazilian and Spanish styles, but if you catch me around the campfire you’ll find that I also sing in over 10 languages, including traditional Hawaiian fishing tunes and Irish classics in Gaelic.

Denny Aaberg and I recorded a CD titled Saltwater Cowboys. I gig with Denny around town and at surf events. But more than gigging with Denny I surf with Denny. He lives right at Rincon and we often go out early before the masses arrive. At 69 he's still usually the best surfer in the water. Totally fit and totally stoked.

Where has your musical and surfing life taken you?

I played classical bass all through junior high and high school and had no real plans to go to college. The USC Symphony was recruiting around the country and invited me to try out. They offered me a scholarship so suddenly I was in the USC Symphony.

It was really uptight but a great orchestra. After getting sick of commuting to SC from the beach I transferred to San Diego State. They had a really shitty orchestra but really good surf. I spent most of time there surfing the Sunset Cliffs and doing surgical strikes to Baja.

I became more interested in foreign languages and switched my major to Spanish and Portuguese. That has served me well on surfing trips to Mexico, Spain, Portugal and Brazil. I've played music all over Europe, Central and South America and the US. Eventually I ended up playing music and teaching elementary school in Tamarindo, Costa Rica. I lived there in ‘93 and ‘94. Tamarindo was paradise back then. Just a small little fishing village at the end of the road surrounded by perfect waves. I still go back as often as I can.

What would you tell someone who wants to make a career in the surf industry today?

The only thing I know about the surf industry is from when I worked at Con Surfboards. I was there from ‘80 – ‘83. Our manager was a big body builder from England. He encouraged us to drink beer while we worked. He said he had data that showed board sales increased in direct proportion the amount of beer we consumed.

That was the best job I ever had. Con Colburn walked in one rainy Sunday and I was passed out in a box full of Oneill Booties. I got fired.

If it weren't for surfing I'd probably be playing in some major symphony these days, maybe in Berlin, maybe in Chicago. Instead I'm teaching 6th grade bilingual kids and gigging in Santa Barbara, traveling to exotic locations to surf on my frequent vacations. I love it.

Where did you grow up and who did you look up to when you were a child?

I grew up in Venice Beach then moved to Santa Monica when I was ten. As a teenage guitarist I was inspired by Hendrix, Page, and Ace Frehley. In surfing I was influenced by Shaun, Rabbit and later, Curren.

Who and what inspires you today?

Today I write and record mostly original music. My latest CD, Can't Tell You That is available on iTunes. My favorite musician of all time is Joni Mitchell.

You play music with Denny Aaberg, Producer of Big Wednesday and hang out with legendary shaper Skip Frye. What's it like to be around some of the legends of our sport?

I actually recently got kicked off of the Frye Team. For years he called me his "Santa Barbara Test Pilot." For reasons unknown to me I'm off the team. I suspect he found out I'd sold some of the boards he shaped me. Now I'm on Team Hynson.

Who would you jam with in heaven?

Of all the places you have traveled to, what place in particular stands out?

Andalucia, Spain. Great waves. Perfect climate. Costa Rica too. It still feels like home when I'm down there. Playa Grande is my favorite wave on the planet.

What are your top 3 favorite waves/surf destinations in the world?

Who has made the greatest impact on surfing and why?

Skip Frye. Legendary shaper and still one of the best surfers. I was surfing with him 2 years ago at PB. It was good size, maybe 2 to 3 feet overhead.

Skip and I were paddling side by side trying to make it over a good sized wave that was approaching. As we both went up the face, to my complete surprise, he spun around and did a one paddle takeoff. I don't know how he could have made that late drop. After I popped through the wave I turned around and saw him flying down the line. Unreal.

What’s next for you?

I'm taking a leave of absence from teaching in 2017 to head back to Andalucia. There are a few right points I haven't surfed that are rumored to be very good ....