The History of Surfing - Part 1 - Origins 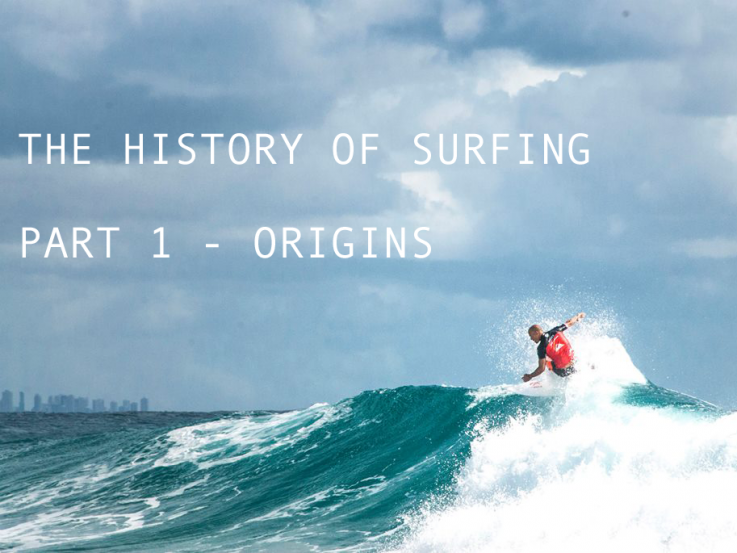 The history of surfing is, it seems, always up for debate. The discussion about where surfing came from, where it’s been and who started what is ever evolving, especially if you decide to focus on origin or attempt to consider the associated culture, or the broad and varied philosophies found throughout that culture, or determine what ‘counts’ as surfing. Often conclusions made are based largely on opinion, shaped by what you ride, where you’re from and what your Dad/weird uncle/surf sister told you.

When you start looking into it there are literally thousands of books, websites, essays and films centred on surfing’s origins and history. And we’re still fascinated by it. Even non-surfers are drawn to surfing (the recent Chanel ad is perfect proof of that) and are interested in the ‘why’ and ‘where did it come from’.

To label surfing as a sport seems limited in a way because people’s lives and the history of entire nations is interwoven with surfing in its many guises; as a way of life, a philosophy, a business, a game, a sport, a lifestyle, an occupation and, a lot of the time, as good fun. To try and define surfing as one thing or the other opens up a whole can of worms. You only have to peruse the online surfing forums to see the comments from disgruntled members of the surfing community, stating they feel they’ve been misrepresented, because they don’t identify with the particular box the author is writing surfing into.

In the context of this article that presents a problem. Because to talk about the origins of surfing you need to choose. Pick an angle, define what you’re talking about and have an opinion. There simply isn’t room for every angle. Representing the multi-faceted entity that is surfing, it’s story, culture and community, and endeavouring to discuss its origins could fill a whole book (in fact hundreds of books). And to do that and not come out the other end of that (long) journey having painted surfing as an overtly self-important effigy, reminiscent of your mate after one too many hits on the peace pipe, is seriously hard work

This is constantly demonstrated in the mainstream media, when non-surfers ask (usually famous) surfers to talk about surfing in a way they can relate to. The result is often cringe-worthy and way off the mark, despite the valiant effort of all parties to capture something authentic.

So before we delve into the origin and constantly unfolding history of surfing, lets just get it straight right here that there are many varied accounts of when and where surfing came from and what the definition of ‘surfing’ is. If free-thinking and exploration of the different mediums of connection to the universe is your definition of surfing, then we could go all the wave back to the dawn of intelligent human life. But for the purposes of this brief foray, the focus is on the earliest recorded accounts of surfing we currently have, detailing people sliding across lumps of ocean swell towards the shore.

The oldest known records of surfing come from way back in the late 1700’s. In some accounts Tahiti is referenced, whilst in other’s it’s Hawaii, and some players eschew detail completely by simply referencing Polynesian Islanders. What is common is that in all of these records the writers are expressing surprise and awe at watching the natives surf, remarking on how beautiful and skilled it looked and how much the people in the water seemed to be enjoying themselves.

Because these groups of island nations were surrounded by water and used the ocean as a source of food, it seems viable that surfing would have evolved from riding waves seated in a canoe to return from fishing or gathering food. The evolution from these earliest incantations, to standing on a specially designed board to surf was likely affected by changing cultural priorities and the development of more complex societal hierarchies. It’s been suggested that surfing competition was used in Hawaii to settle disputes and strengthen communities, as well as for fun, fitness and as a spiritual ritual of connection to nature.

Surfing suffered a near extinction as European’s began settling in Hawaii, Polynesia and similar island nations. Originally it was supposed that missionaries had banned surfing, labelling it as an immoral act (back then people surfed naked). But newer research has turfed up accounts of missionaries joining in and learning to surf themselves, which has led to the idea that as the native populations turned away from self-subsistent lifestyles to paid work, they simply didn’t have the time or the energy to perfect the art of surfing or teach the next generation. Add to this the decimation of the native population due to foreign diseases and the accelerated change in community structures and power systems that occurred as global exploration continued, and the result was an almost complete loss of surfing and it’s culture.

The story goes that only a small percentage of Hawaiian natives survived and of them only a few still surfed, and very little is known about what happened to the surfing communities said to exist in Tahiti, Tonga and Pre-Columbian Peru. However, thanks to these few surfers, most of whom were watermen, surfing was not completely lost. They carried on surfing relatively unwatched for nearly 2000 years. Eventually Duke Kahanamoku, a famous Hawaiian sports man and Olympian swimmer, would go on to capture the imagination of the public and spark a new interest in surfing. This interest spawned the modern day version of surfing that is now loved by millions.

This article is the first in a series that we are penning about the history of surfing and the surf industry. Stay tuned for the next instalment...