The History of Surfing - Part 10 - You Should Have 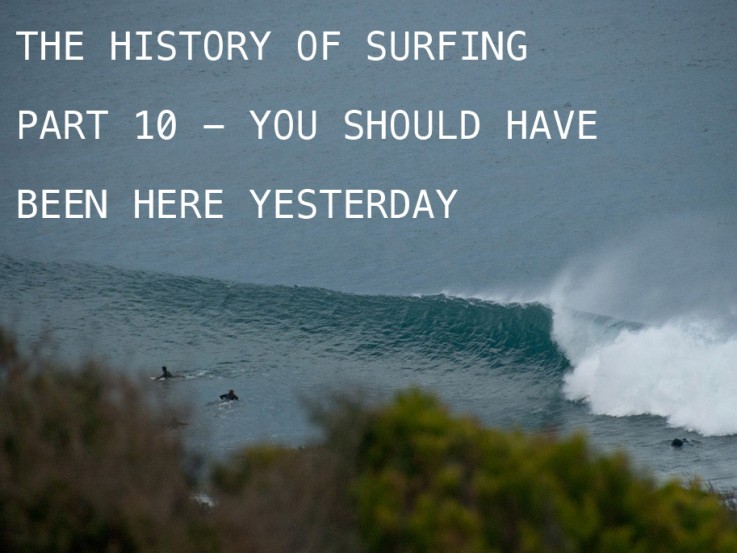 The History of Surfing

Part 10 - You Should Have Been Here Yesterday

With the explosion of the acid neon eighties vibe, so the world tour got louder. Up until now Californian contests had been almost ridiculously low key. The Op Pro introduced a new style of contest. There were VIP areas, logos everywhere, music blaring, merch stands, skate ramps, copious amounts of give-aways and free gifts to be had. Everyone wanted a piece of the pie and sponsors came forward in their droves to support surfing events.

The number of world tour events doubled as everyone caught on. The Op Pro put spectators before surfing, or even decent waves, and got rid of the waiting period format. In reality the spectacle around the surfing contest was the focus.

This wasn't representative of the most important aspects surfing ideology. The professional surfing on show was usually well below standard because the waves were uninspiring. The surfing industry was once again at war with itself and it's own image.

By 1986 the scale of the Op Pro was enormous. Eventually it ended badly as riots exploded, cars were smashed and set on fire and windows were broken. There were calls for surfing to go back to it's roots. Even professional surfers were expressing their concerns. Surfing wasn't like other sports. It wasn't transferable to mainstream. Why try and make it into something it isn't? They were all swiftly reminded that sponsors had the money and therefore, what the sponsors wanted, they got.

Meanwhile, away from but alongside of the surfing industry, meteorology and forecasting were making advances of their own. Surf reporting was originally made a commodity by Surfline. Set up as a dial-up phone service, anyone could call up and get updates on swell and relevant weather conditions. Busy tones and delays were an issue. A DIY approach to forecasting equalled large chunks of time hunting around for waves and that was a problem for most surfers. Every surfer hated turning up to the beach and being told “You should of been here yesterday!”.

No-one really understood wave forecasting until the war. It became necessary to know conditions for landing troops on beaches. In 1960, knowledge took a leap when NASA launched a satellite into space and began churning out isobaric charts. Arranged in sequential order, meteorologists could now define a storm by size, shape, depth, growth, speed, temperature and velocity.

However, there was a long way to go to understanding how these new facts and figures directly effected the waves, even by top weather gurus. Weather buoys were deployed across several coastlines and oceans, which added extra data to the mix. The National Oceanic and Atmospheric Administration was formed (NOAA) and began producing more accurate graphs, as well as around the clock VHF broadcast marine reports. Surfers would now have to take it into their own hands and learn for themselves.

Sean Collins was one such surfer and a self taught meteorologist from California who scored waves using faxed millibar charts of the South Pacific from New Zealand. He regularly mapped and recorded data to tell him which break would be working when. In 1984 Surfline hired him as chief surf forecaster. The new and improved Surfline debuted in 1985, using a phone line with a digital answering service to avoid the plague of the 'busy' tone. Collins perfectly predicted his first early season, big, clean swell an entire week before it's arrival. Unsurprisingly, Surfline shot out in front as the preferred provider of forecasting for surfers.

As is the trend, this technological leap had a downside. It refuelled the fire of California's bad rep for commercialism. Some people thought it was innovative. Others thought it was soulless and money grabbing. Inevitably it put more people in the water, taking hard won knowledge and turning it into a commodity - available to anyone willing to pay for it. None of the bad press mattered. It became massively popular and is used by practically ever modern surfer.

Video killed the surf movie. As titles rapidly became available on VCR, Endless Summer, Big Wednesday and many more were now available to watch in the comfort of your own home. The quintessential surf movie at the cinema died. With this development though, came the ability to video tape surfers to help them correct their form. Using rewind and slow motion buttons, surfers could analyse manoeuvres and practice them. Some surfers began using videos as instructional tools.

A second surf boom loomed and then swept across the industry. In the mid 80's, surf companies bought out a dizzying array of new products to make surfing easier and more enjoyable. Rash guards, traction pads, wax combs and surf board bags were now a part of mainstay apparel. Pro surfers were capitalising on the boom with prize money increasing, from roughly half a mil in the mid eighties to just over two million toward the beginning of the nineties.

Surf clothing companies were leading the charge as the boom gathered momentum. The big players made up what was now estimated at a billion dollar industry. Trade shows returned bigger and better than ever with live music, surf film premiers and bikini contests. The industry tried to maintain it's non-corporate visage but eventually gave up the ghost as it became more obvious that huge sums of money were changing hands.

All the major brands were struggling to walk the line between cool and commercial. Selling out meant bigger profit but loosing the core surfing community. Gotcha led several anti-mainstream ads. They tried to have the best of both worlds, keeping their corporate dealings quiet, only to spectacularly fail as they watched loyal fans desert them due to lack of credibility.

Quiksilver was one of the only companies to successfully manage going corporate and holding it's fan base. After signing on American licensees, the branch out-sold it's Australian parent company and went public. As this happened they bought trademark rights which gave them more freedom from the Aussie branch. Despite warnings from the parent company that this would ruin their coveted authenticity, they began trading with major shopping retailers. The Americans stuck to their tactics; having good pro ambassadors, making awesome promo videos and being heavily invested in competitions - and it paid off.

The recession coincided with the surf industry bubble bursting. Having tended to their surf roots well enough, Quicksilver emerged relatively unharmed and were heralded as big, but full of soul. Quiksilver was now on it's way to becoming a billion dollar industry all on it's own.

Surfing was still considered a non-political past-time. It was where people went to escape conformity. By the late 80's, eco activism and surf activism was becoming more and more necessary. Increasing industrialisation was a greater threat to the oceans and surf breaks themselves. People would need to stand up for the surfing environment to survive.

Dredging of rivers ruined surf breaks. Polluted runoff from factories and sewage plants made surfers sick. In 1984, the Surfrider Foundation was launched by Glenn Hening, a Santa Monica surfer and aerospace engineer, an environmentalist called Tom Pratte, as well as Lance Carson, a noseriding legend.

Surfrider was professional and they played by the rules. They began to win small victories against environmental offenders. In 1991 they became major players in the environmental forum when they successfully prosecuted two Fortune 500 companies for polluting waterways. Surfrider won the second largest Clean Water Act settlement in history, costing the offenders over 60 million dollars in fines and improvements.

Surfing, the industry and the surfing community were no longer a joke - they meant business.

This article is the tenth in a series that we are penning about the history of surfing and the surf industry. Stay tuned for the next instalment...