The History of Surfing - Part 11 - About Time 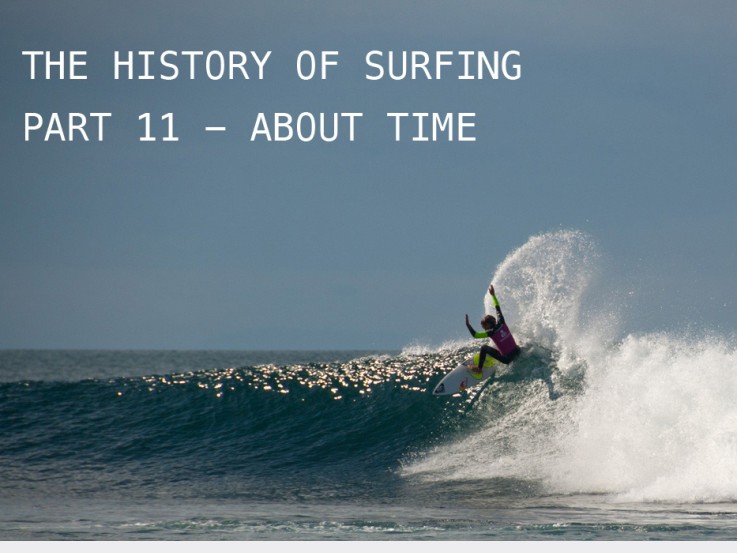 After the global recession in the early 90's, surfing companies were going bust left, right, and centre, in every corner of the world and in every major surfing destination. Those that made it to the mid 90's cashed in on a third boom and by 2006 the surfing industry was worth an estimated $14 billion. The good times rolled until the Global Financial Crisis of 2008. Surfing didn't have a lot to do with the industry at this point, with surfboards making up a measly 1% of total sales.

However, some much needed diversification was on the cards. Women become a major part of the industry. Previously an untapped market, the birth of the female surfing movement was responsible for the highest profits and the largest demographic shift to happen in surfing history.

Up until now, women's surfing had been too small to really garner any attention. There was always a core group of female surfers, but not a commercial following. Although women had stepped in and out of the spotlight throughout history, it was never enough to cause more women to get in the water, and roughly 3% of the total surfing population were female.

Sexism was still rife throughout the industry; women weren't put on the covers of magazines, taken on promo trips or shot for sections in surf movies, and prize money was a paltry fraction of the male tour. A liberal dose of sexual innuendo was still thrown around and the 'bikini model' rather than the 'female surfer' was more more widely publicised. Whats more, even the men that stood up against the blatant sexism occurring, received a backlash of judgement and retaliation for their trouble.

Just because women weren't as well represented as men, didn't mean there weren't notable professional female surfers. Frieda Zamba from Florida won five of ten events and became female surfing champion in 1984. She followed that up with back to back wins in 85 and 86, before winning a fourth title in 88.

Wendy Botha, from South Africa won four championships in between and after Frieda, managing to put a few noses out of joint by claiming she could surf as good as some of the guys on tour, before triumphantly posing nude for Aussie playboy.

Another Australian, Pauline Menczer, won a world title despite not having a major sponsor. Her Mum paid for her to take part in the tour because, although she was a great personality and an impressive surfer, she but didn't fit the bikini model mould, so none of the surf companies were interested. She was vocal and honest about her struggle and was quoted as explaining, “I don't have big boobs, blonde hair, and blue eyes. Guy surfers can get by on personality, women can't.” Although she was an impressive competitor, suffering arthritis throughout her career and often surfing through chronic pain, the sexism of the industry eventually got to her.

This changed when sixteen year old Lisa Andersen, a runaway from an alcoholic father in Florida, arrived in California in 1985. She turned pro two years after her escape and was quickly heralded as world champion material. However, she failed to live up to expectation, winning a few events but lacking consistency. Andersen was better cared for on the tour and, whilst her competitive career lacked impressive results, she became the world's best female free surfer.

Her style was different to anything people had previously seen and broke the barriers surrounding female style. She was aggressive and driven and pulled off perfect manoeuvres. She had a similar flow to Tom Curren and she successfully dispatched of the distinction between how a man should surf and how a woman should surf. Now there was just 'the best way to ride', gender wasn't as important. It also helped that she was beautiful, athletic, blonde and bubbly.

She was by no means perfect though. She accidentally fell pregnant to the head judge Renato Hickel and many thought this would end her career. Instead, Anderson found a deeper level and, under the pressure to provide for her daughter, she started to win events. Three weeks after giving birth she began the 1994 world tour and won or placed high enough in every event to take the world championship title. The scene that had steadfastly ignored Pauline Menczer couldn't get enough of Anderson. Magazines even put her on the cover. She was a star and the fans loved her.

Quiksilver sponsored her and, seeing a gap in the market, quickly asked her to come on board and help revive their junior brand. Not content with a minor role in kids apparel, she recommended making a women’s board short that could withstand wipeouts instead. Men's boardshorts were getting longer and looser and harder for girls to wear (Anderson had been wearing men's shorts to compete in). The new women's shorts were the opposite; high cut and tight.

Sex appeal was becoming part of other female sports at around the same time. Anderson believed that the surf industry needed a makeover and Roxy exploded onto the scene, filling the void and simultaneously becoming the industry's newest and richest market. Annual revenue spilled over $100 million by 1999 and had increased by five times that by 2003.

Of course other major brands bought out female lines following this success. Suddenly the male dominated surf industry was all about women. CEO's realised women bought a lot more clothes and accessories than men did. Now female surfing related stores, trips, movies, magazines and documentaries were filling every corner of the market and, more importantly, becoming the norm.

Several milestones perpetuated the growing female market. Rell Sunn, a much loved female Hawaiian surfer, became a an icon almost equal to Duke Kahanamoku after surfing through her 15 year battle with cancer before losing her battle. Blue Crush was made by Universal Pictures, which cost roughly the same to make as every surf movie ever made. It was now cooler and wilder to be a female surfer than it was to be a male surfer.

However, the trend was hyper feminine. It was pink or nothing and focused more on 'girls' than 'women'. Roxy girls were active and fun, but they weren't on the world tour. Surfing itself wasn't really the focus. These companies were selling the lifestyle, and doing so very successfully. Their campaigns revolved around 16 – 20 year old girls having fun in faux set ups. It was hard to tell whether it was female empowerment or over sexualisation of young girls, a debate which still rages on in women's surfing (and sport in general) today. Either way it certainly wasn't authentic.

Despite the commercial focus on young girls, women of all ages, shapes and sizes were going surfing in larger numbers than ever before. As a consequence of the advertising, lots of girls tried surfing and soon found out it was hard work. You definitely didn't look like the models in the shoots after surfing that was for sure. For the women who did stick to it and became good surfers, surfing had nothing to do with what they wanted to look like.

The new interest from women sparked a hike in the numbers of surf schools and surf tourism destinations. By 2011 it was estimated there were 35 million surfers globally, largely thanks to more women in the water. Although it's hard to isolate actual surfers from the fashionistas, it's estimated that women now make up 15 – 20% of the total surfing population.

Men were largely unaffected and didn't seem to care. This was probably due to a changing culture globally, rather than just in the surfing community. Women were becoming more prolific and more successful than ever. Female surfers did have a profound effect on the vibe though. With female friends, girlfriends and sisters in the water it seemed the men were better behaved. Less testosterone meant localism was decreasing and violent outbursts were becoming less frequent. It was a relief to lighten the mood.

It wouldn't all be cute Roxy girls and Lisa Andersen forever though. Layne Beachley took centre stage and matched Andersen's four straight championships, then blew the record out the window with her sixth title, and then managed a seventh in 2006.

Beachley had no real rival. She was skilled in any conditions and in 2001 became the first woman to break the thirty foot wave glass ceiling at Outside Log Cabins. Champions came and went after Beachley but Rochelle Ballard and Keala Kennelly had the next biggest impact on progressing women's surfing. Ballard became the first woman to really skilfully ride the barrel of a wave, whilst Kennelly consistently pushed the boundaries of what it was believed a woman could do on a wave. She was riding bigger barrels than any other female surfer and was the first woman to tow surf Teahupoo.

Both these women were also awesome alternatives to the 'Roxy girl' and they were loved for it; diversifying and pioneering the sport in one fell swoop. Mercifully the girly girl image became diluted and finally a broader audience of women surfers were catered for.

Steph Gilmore won the 2007 championship which seemed to go hand in hand with a change in the tone the industry took with women. A lot of the 'girls only' mags went bust, but Carissa Moore made the cover of Surfer and Sally Fitzgibbons was featured actually surfing in ads, rather than just holding a board and smiling suggestively as was customary. Steph Gilmore has gone on to be one of the most celebrated female surfers of all time, universally loved by both men and women, and has won an impressive six world titles to date.

The tour has diversified with women from all corners of the earth competing at the highest level ever seen. What the future holds for women's surfing isn't clear as a battle continues to be wrought over the importance of athletic ability versus sex appeal, whether women should be trying to surf 'like men' or not, and whether their tour deserves the attention shown to the male tour. One thing that is obvious though is that female surfing is certainly moving forward and new talent is increasingly exciting. What's more, women all over the world are being encourage to pick up a board and get in the ocean. About time.

This article is the eleventh in a series that we are penning about the history of surfing and the surf industry. Stay tuned for the next instalment...