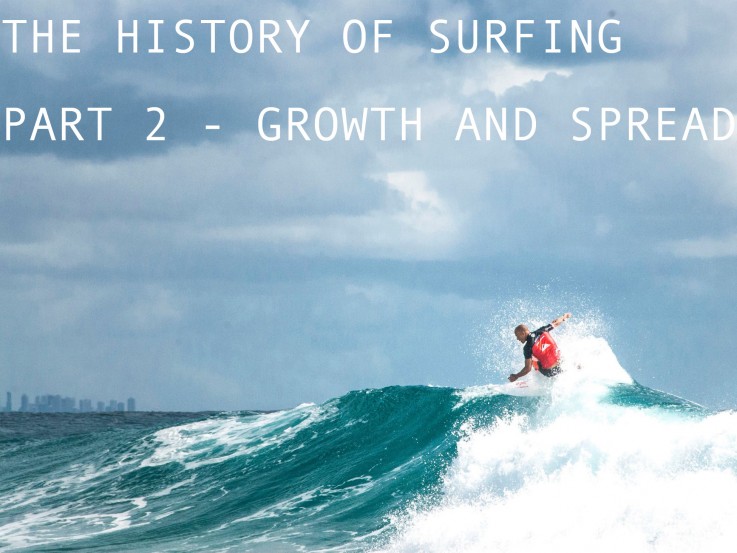 In part one of this series we delved into the exploration that is the origins of surfing. Between the earliest accounts of surfing and the recovery, revival and reshaping of modern surfing, close to two thousand years elapsed. The few islanders that survived to surf another day, did so generation after generation almost completely undisturbed, as well as largely unrecorded it would seem. The next available accounts of surfing were recorded in the late 1800’s.

One such report is a recollection of three Hawaiian princes, who were attending military school in San Mateo, North America. They were reported to have taken a trip to Santa Cruz, California during a break from school. Here they took to the San Lorenzo river mouth to surf on custom-made redwood boards. Not much is really known about this session but it’s thought to be the first time that anyone had surfed standing up in North America. Earlier than this there are vague accounts of surfing in canoes being seen along the Californian coasts.

It’s worth a mention here that people may well have been canoeing and body surfing waves all over America, as well as other coastal communities around the world, for years before, during and after this historic event. Because we know that surfing evolved, moved and changed throughout history there could have been many contributing factors to it’s recovery from obscurity, but this was definitely one of them.

Not long after this princely spectacle, George Freeth, the son of a part-Hawaiian mother and Irish father who was born and raised in Hawaii, was bought to California. It was 1907 and he travelled from Hawaii to demonstrate surfing and lifesaving skills. This was all part of a grand opening, a publicity stunt, for the christening of a new railroad near Huntington Beach, which got it’s name from Henry Huntington, who owned the railway.

He got the gig after meeting Jack London, a best selling author of celebrity status through another surfer, writer and traveller called Alexander Ford. Ford, already an avid surfer, introduced London to surfing. He immediately fell in love with it and on one particular session he got to see Freeth surfing first hand. He wrote a glowing review, which was published more than once in America. London’s status and opinion was highly regarded enough that Freeth was invited to perform for the crowds at the railroad celebrations.

After the display, Freeth toured the coast giving several demonstrations. He is credited with inventing the surf lifesaving rescue paddleboard, as well as with sparking the adoption of the surfing lifestyle and surf lifesaving movement in California. Unfortunately, Freeth died young during the global flu pandemic of 1919, a tragic end for one of surfing’s most influential advocates and the first famous surfer of all time.

Meanwhile, in 1912 a native Hawaiian swimmer was breaking the world record for the 200-metre freestyle in his trial for the US Olympic swim team. Duke Kahanamoku, a peerless waterman, competitor and surfer, easily qualified for the team and went on to win several Olympic medals in more than one Olympic games, making him a household name. People in America assumed that his name was literal, that he was in fact Hawaiian royalty and this seemed to augment his fame and endear him to the public. Even though he was loosely connected to important native families, Duke himself always laughed off this assumption, explaining his name was given to him after his father.

When Duke wasn’t training or competing he travelled far and wide giving swimming exhibitions and soon incorporated surfing demonstrations into these displays. Widely described as a warm, genuine and approachable character it is thought he stoked the flames of the small, but rapidly growing surfing community in California before he made a trip to Sydney in Australia and introduced surfing to the locals there.

This introduction is thought to be the most influential event in Australia’s surfing history, igniting a love affair with surfing so strong that it (arguably) influenced the entire modern culture. Depending on your stance, surfing continues to be part of mainstream Australian culture and lifestyle countrywide. Some people may disagree on the basis that ‘surfing isn’t what it used to be’, not to mention the obvious cultural shifts, settling and further diversification that have occurred, but the fact still remains, if you ask foreigners about Australia, surfing in some form or other is bound to come up.

Back in Hawaii surfers had revived their own culture. Campaigning local estate owners, several non-native surfers managed to set up the Hawaiian Outrigger Canoe Club, the first modern surf club dedicated to the preservation and proliferation of the ancient Hawaiian pursuits of surfing and outrigger canoeing. They cunningly sold the idea on the premise of promoting Hawaii as a destination and surfing as an attraction. The club was hugely popular and in the space of a few years there was over a thousand members and hundreds on the waiting list.

Local native Hawaiian surfers had also set up Hui Nalu, an informal surf club, to try and revitalise native Hawaiian interest in surfing. The two clubs became friendly competitors and interest and dedication to surfing skyrocketed as more and more people fell in love with surfing, it’s culture and lifestyle. Waikiki became a monument to this following as more and more surfboards appeared on the beach.

In the space of a few years surfing had emerged from the shadows, captured the imagination of thousands and spawned significant followings in Hawaii, America and Australia. From here the entire movement gained traction, sped up and evolved in dizzying leaps and bounds, as pioneers and rebels alike continuously burst through one limit after another.

This article is the second in a series that we are penning about the history of surfing and the surf industry. Stay tuned for the next instalment...