The History of Surfing - Part 3 - The Innovators 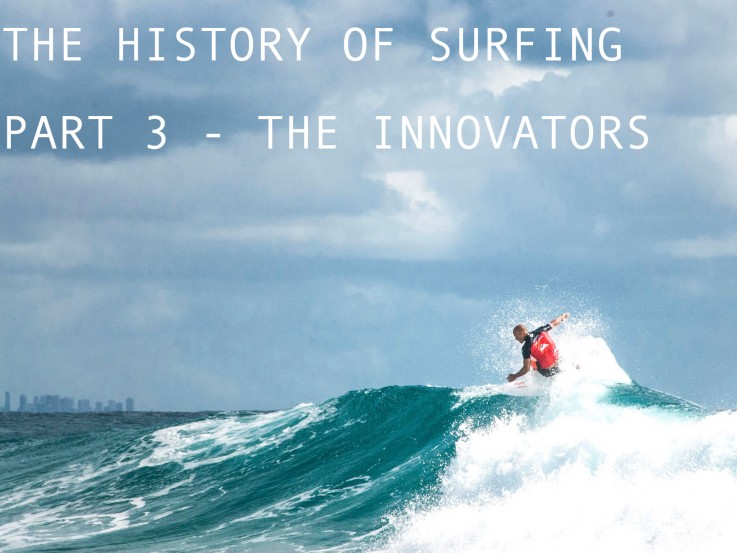 In part two of the series we saw the revival of surfing, emerging from obscurity to germinate new surfing communities around the world, primarily in Hawaii, America and Australia. These small pockets of surf culture began to grow, naturally taking on characteristics of their own, morphing to suit the local coastlines and customs.

As Earth rotated onwards into the 1920’s surfing began to revolutionise itself. The invention of the motor vehicle birthed the (now classic and well documented) idea of the Californian road trip. As surfers became mobile enough to travel up and down the State, exploring the coastline and discovering new waves, the culture evolved and took on it’s own character and meaning. Groups of surfers began to turn away from traditional societal expectations in favour of exploring, travelling and surfing. Tom Blake and Sam Reid, both Santa Monica lifeguards, took a trip up north to Malibu where it was rumoured there was a stretch of coast where waves were going unridden. They jumped fences in order to ride the steeper, faster waves of Malibu for the first time in modern surfing history.

Blake travelled to Hawaii for the first time in 1924 where the locals had heard of him, as, like Duke Kahanamoku, he was a relatively famous competitive swimmer. Through swimming he knew the Kahanamoku family, including Sam (Duke’s brother), who introduced him to the local culture, took him surfing and helped him buy a lighter board. He fell in love with Hawaii and this sparked his interest in surfboard design. Eager to find out more he spent time in the Bishop Museum in Honolulu, studying the designs of the historic Hawaiian boards.

An innovator and a restless character by nature Blake travelled back to Hawaii in 1926 where he studied ancient board design further. He appealed to the museum to move and restore two antique koa olo boards more than once. They were the only two of their kind, and had been strapped to the outside of the museum with wire. Blake didn’t give up and eventually he was permitted to do the work himself.

Once he had successfully finished the two ancient boards he replicated the design and in the process decided to drill one board full of holes to dry it out and lighten its load. After covering the board in a veneer and shaping it the board was 15 foot long, 4 inches thick and 19 inches wide, but only weighed 45kgs, which at the time was light for a board so large.

The first modern surfing competition was held at Corona Del Mar, in Orange County in 1928. Although competitive paddle races, surf lifesaving carnivals and other forms of watersport contests were being held all over the world, the Pacific Coast Championships were the first to require participants to ride a wave in order to win. Each surfer was required to start on the beach, run to the water, paddle to a starting buoy, then turn back to the waves and surf into the beach standing up. Blake won the event using clever strategy and two specially designed boards. He placed his wave riding board on top of the long hollow olo board for the beginning of the race and out-paddled the other competitors, despite their head start. Once he reached the starting buoy, he bailed the longer board to surf into the beach on his lighter wave riding board.

This was the beginning of surfing’s uneasy relationship with competition. Some surfers shunned competition, labelling it a departure from the ‘soul’ of surfing, whilst others relished it and fully participated, feeling it was a necessary progression for the development of surfing and surf culture.

Blake had his eyes on Hawaii. Spending most his time there he began competing with his new hollow boards and further developing the idea. In the 1930’s a standard paddleboard could weigh 55kgs. Blake invented a rib-braced hollow board that weighed a mere 27kgs. He began to break records with his lighter faster boards and whilst he had achieved his goals of advancing the sport and competitive nature of surfing, this signalled the end of many of his friendships. Several years later he was quoted as saying, “I discovered too late that beating the locals at their own game, in front of their families, could sour relations. It was the end of the real good days.”

Blake’s hollow boards were quickly adopted by the surf lifesaving community as they were lighter to carry, quicker to reach casualties with and buoyant enough to aid in rescues of more than one person. Learner surfers also favoured these boards because they were deemed ‘safer’ than the heavier versions, which earned them the unfortunate nickname of “kook-box”.

He didn’t stop there though. Constantly searching for new ways to get a better ride, in 1935 Blake attached a steel keel fin to the bottom of his hollow board. This was to be his most significant contribution to surfing history and the evolution of how people rode waves. He found the fin gave him greater stability, easy manoeuvrability and greater control. Whilst most people rode waves in a straight line, he could now move the board along the face of the wave. Despite this it wouldn’t be until the 1940’s, five years later, that the fin became a standard fixture on the majority of surfboards.

As if these contributions weren’t enough Blake is also credited with being the first surf photographer. He hand built a waterproof camera housing, which he would balance on his board to paddle out to the lineup to get shots of surfers in and on the waves. He later published a book about surfing called Hawaiian Surfboard, and although the writing wasn’t great, his photographs were unparalleled. They stunned both the mainstream media and surfers alike, adding further momentum to the already growing surfing community and building surf industry.

Blake is remembered as an odd outsider. Teetotal, vegetarian and always casually dressed, he lived alone (after a very brief marriage at age 23) and had few friends. A quiet and damaged figure he introduced the idea that surfing could be a refuge and relief from the big bad world. He introduced the idea to surfers of the time that you could live a healthy and fulfilling life by doing what you wanted, by living simply, by exploring, by going surfing. Arguably that is a greater contribution to surfing and it’s history than any of the above.

This article is the third in a series that we are penning about the history of surfing and the surf industry. Stay tuned for the next instalment...