The History of Surfing - Part 4 - Technology 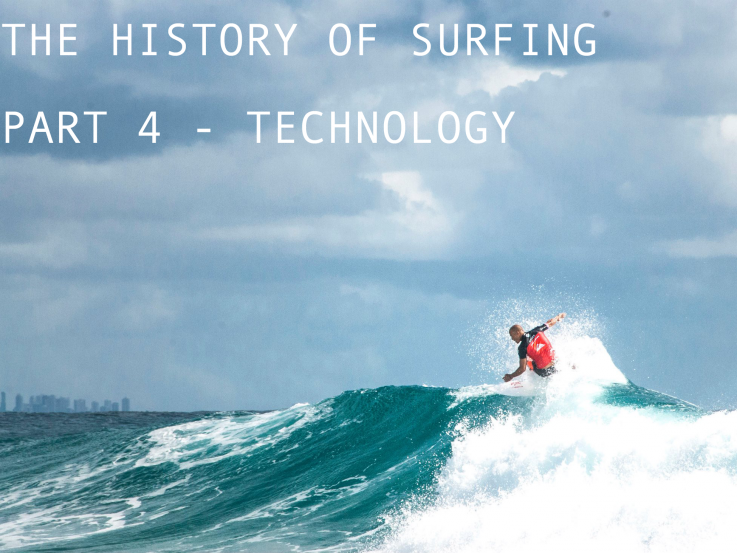 Lighter boards, competition, keel fins and the use of different sized boards had sprung up through the roaring 20’s but the world was about to take a swift slap to the face as the Great Depression of the 1930’s was sparked by the collapse of Wall Street. These were lean times but it seems surfers were sitting right in the sweet spot. Their basic lifestyle and tight knit communities meant they were comparatively unaffected. Reliance on a few choice waves for entertainment, relaxation and therapy suited them just fine. A suntan became fashionable. Previously considered the mark of the working class, a brown, sun-kissed hue was now considered healthy, natural and attractive. More and more people were drawn towards the simple lifestyle, disillusioned by apparently non-existent financial security, and the numbers of surfers continued to grow steadily.

Surfboards were still being made out of wood. Balsa wood had been discovered and was used because it was half the weight of redwood, but redwood was stronger. This lead to composite boards made with balsa decks and redwood rails. The ‘best’ boards were the ones with five coats of marine varnish, withstanding the creep of the salt water and the smack of the sun for longer. Rail design itself was changing as shapers ditched the harsh 90° box rail for a rounder, more forgiving shape. Surfing was already becoming more accessible thanks to lighter boards, but this tweak in design meant less skilled surfers weren’t thrown off their board every time they dug a rail.

Experimentation was where it was at. Wally Froiseth and his friends, inspired by pioneer Tom Blake’s winning hollow boards, began transforming board design. Tail shapes were slashed, rearranged and rounded. Named ‘Hot Curl’ boards because they could sit comfortably in the pocket and slot into a tube, they became hugely popular in Hawaii.

Pete Peterson, an exceptional all round waterman and impressive competitive surfer (there was nothing this dude couldn’t do, from sailing to board making to sea rescue, his talent for and knowledge of everything ocean orientated was unparalleled at the time) from California dominated the surfing scene there for the majority of the decade. He’s occasionally credited with having bodysurfed Pipeline (naked) for the first time ever in recent history with a mate of his Lorrin ‘Whitey’ Harrison. Later on in the decade, the advent of every modern surfer’s awe and fascination with Pipeline began when Whitey and Gene Smith rode the wave with stand up surfboards.

Not long after, World War II reared its ugly head. This time surfers and the surfing community felt the heat. There are some incredible stories about the lengthens taken by some surfers to avoid subscription after stories of unimaginable brutality began reaching home. Despite the widespread damage and destruction this war undoubtedly created, scientists were getting busy trying to come up with new materials and better equipment to give them a competitive edge over the enemy. Fiberglass was one such material.

As the USA rose to superpower status the new technologies of the war were reshaped and resold for use in civilian life. The invention of ‘plastics’, namely fiberglass and polyester resins, were revolutionising the water sports industry. Pete Peterson, already a well known shaper and retailer of surf equipment, happened to be friends with the right people and began glassing boards instead of varnishing them. He also pioneered the first completely fibreglass paddleboards. Like many breakthroughs of the time, the general surfing community wouldn’t be aware of the new developments until years later.

John ‘Doc’ Ball documented surfing before, during and after WWII. A dentist and keen swimmer, Doc found surfing when he was searching for a way to distress from his day job. He was only the second photographer to document surfing from the waves (after Tom Blake) and along with the exposure that the war had given the Hawaiian islands, his book inspired more people to start surfing.

Big wave surfing, a pretty obscure idea and something more than a few surfers labelled ‘impossible’, also edged its way into reality. Not many surfers were game to ride big waves. The equipment was heavy, the paddle out was all time and the wipeouts were potentially fatal. Considering elite, well-trained surfers still die from big wave surfing today, with all the equipment, knowledge and forecasting we have invented, what these few were doing was unprecedented. John Kelly, Rabbit Kekai and Woody Brown are said to have provoked a mass exodus to Hawaii as photos of their death defying wave riding skills circulated.

Another product of the war was humble neoprene. Despite it taking several years for anyone to question whether this synthesised foam could be used to shrink wrap surfers like four legged seals to help them brave the cold, surfing was taking leaps and bounds. Surfers, athletes, watermen and women pushed the boundaries of what it was possible to achieve in the ocean. Records were being broken, limits were being redefined and all the time wealth and prosperity were increasing in the wake of the war. The next few decades would prove to be part of the most rapid growth surfing and its culture would ever experience.

This article is the fourth in a series that we are penning about the history of surfing and the surf industry. Stay tuned for the next instalment...