The History of Surfing - Part 5 - Maliboom 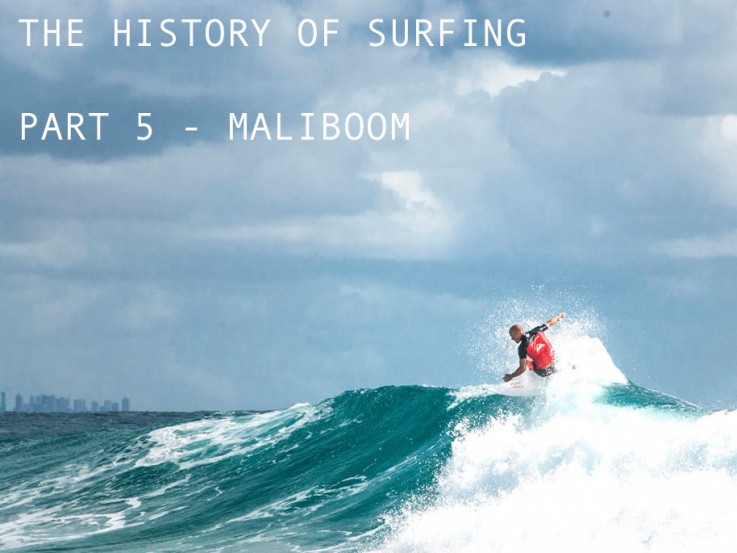 Steaming into the 50’s surfing became a boiling melting pot of new ideas, styles and change. The previous four decades had been a slow burn of growing popularity. Nuances in pockets of surfing culture gradually developed and board design was dictated by your local break. The dawn of the 50’s saw an explosion of innovation. Everywhere you look into this chapter of surfing’s past you can find advances happening at high speed. Fast, collaborative change ebbed out of every corner you could find surfing culture.

But it was Southern California that launched surfing into international awareness. America was becoming increasingly wealthy after the war and California was the epicentre of the entertainment industry, especially for film and TV. Whilst Hawaii was still seen as the cultural home of surfing, attitude, culture and style was being defined by and broadcast from Malibu.

Bob Simmons, a grumpy science boffin and well known surfer, was taking board design to the next level as he began using scientific principles and carefully recorded measurements to shape his boards. He was responsible for introducing hull design to shaping and also pioneered the twin fin, an evolution of the large, straight centre fin.

Simmons is widely regarded as the father of the foam core surfboard. He began experimenting with foam and created the ‘sandwich’ board (a piece of foam between two pieces of wood with a wooden rail and fibreglass finish) but abandoned the idea, firstly because it didn’t withstand the heat and secondly because he thought the weight of a wooden core was responsible for maintaining speed across the wave face. Surfers of the time said his limitations were his temperament and sole focus on speed. He made boards for the way he wanted to surf, for him and no-one else, and soon younger, more progressive surfers would be dominating fluctuating board dimensions.

Joe Quigg and Matt Kivlin were two such surfers, both keen on board shaping. Epitomising the cool and attractive, yet approachable surfer image, they had a legion of girls lined up looking to learn how to surf. To make it easier for them to learn Quigg and Kivlin chopped the lengths of boards down to make them lighter, squared the tail, curved the rail line and softened the rail edge to make their boards as forgiving as possible. First called ‘Girl Boards’ and then named after the girl they were made for (the Darrilyn, the Aggy etc.) the boards meant these teenage girls learnt to surf and then progressed quicker than most of the men before them.

Welcome to the beginning of the female surfing movement. Although there had been various women that surfed before this, it was usually in the role of ‘partner’ for male surfers in tandem competitions. These women were surfers in their own right. Soon they were surfing just as well as the men. Their progress sparked the interest of other surfers in what they were riding. Casually borrowing the boards, whilst trying not to be seen riding a ‘girl’ board, they quickly realised how much better they handled. Eventually everyone had one and they swiftly became known as the ‘Malibu Chip’.

With the Chip beneath their feet surfers transformed surfing style. The stance of the majority of surfers leading up to the 50’s was more representative of a skiing stance, standing towards the back of the board to maintain control. This new shape allowed the surfer to stand towards the middle of the board for a quieter, smoother ride. Kivlin, ever the crowd-pleasing stylist, began standing with one foot in front of the other, hips aligned asymmetrically along the midline of the deck and soon every surfer was copying. The labels ‘goofy’ and ‘regular’ were forever embedded in surfing vernacular as surfers realised one foot preferred being towards the front of the board to the other.

And Malibu wasn’t done yet. As one generation of surfers began looking for new experiences and moved away from Malibu, so the next generation was ready to take the reins.

Dale Velzy became the owner of the first licenced shaping bay and board retail business. He began using power tools in his shaping process. Chain-driven electric planners and specially designed router jigs saved him time and materials. Being able to consistently make the same board in scaled multiples meant business was booming. With the demand for boards rising, the monotony began to wear thin and on a whim Velzy shaped a new board for the sake of doing something different. ‘The Pig’ burst onto the scene.

With a narrow nose, continuous rail, lower wide point, rounded tail, and an oversized raked back fin, this board allowed surfers to ride closer to the curl, perform tighter, sweeping, top to bottom turns and nose ride. Toes on the nose, soul arches and cross stepping defined the dance-like moves of experienced surfers everywhere.

Whilst the surf legends of each era had always been nonconformist, surfing had often taken a back seat to athletic prowess, Olympic medals and watermanship. Now surfers were surfers. They offered no excuse for spending all day at the beach or dedicating their entire lives to riding waves. Enter Mickey Dora and Terry Tracey. Walking onto a scene looking for leadership they took it all in their stride. Dora was the original surf rebel. Cynical, witty, aggressive and entertaining all at once, he defined and cemented the rebel reputation of an entire generation.

Lineups were becoming increasingly more crowded and the new style of surfing didn’t allow for party waves. Rules about etiquette and hierarchy developed and the beginnings of localism, competition and aggression emerged from the deep, like ghosts from days of yore.

Surfer’s once again became solitary creatures, moving away from groups of mates that created insta-crowd wherever they surfed and the term ‘secret spot’ was coined. Arguably one of the most important developments and perhaps most relevant to today’s culture was that the crowding that was plaguing the Californian coastline created the search for the perfect wave. Big name brands still use this concept as one of the most powerful drivers of surf related product. The idea of surfing perfect waves with no crowds is a potent idea and an expression of the nature of the surfing lifestyle. Impermanence and exploration were the way forward.

Exploration wasn’t just for surfers hunting down new waves. Scientists were looking into how and why the ocean worked the way it did. Willard Bascom, an oceanographer, discovered that wave size, variability and energy were connected to how far they had travelled across the ocean uninterrupted. This distance, termed ‘fetch’, determined the ‘period’ of the wave or the amount of time it takes two successive wave crests to pass a given point. He calculated that wave period needed to be double the wave height for good surfing conditions and voila, crude surf forecasting was added to the list of rapid inventions and modernisations springing into surfing consciousness.

By the end of the decade a small but established surf media had attached itself to telling the story of these elusive travelling surfers. The surf movie became a thing and surfers were now travelling to new places and then showing other surfers their shots, tapes and documentary style clips. As these movies and technicolour media circulated, filling the imagination of the masses with salt soaked fantasies, surfing culture spread far and wide. France, Peru, the UK. Where once there had been small gatherings of dedicated wave riders, the masses had seen the light and they wanted in.

This article is the fifth in a series that we are penning about the history of surfing and the surf industry. Stay tuned for the next instalment...