The History of Surfing - Part 6 - An Industry? 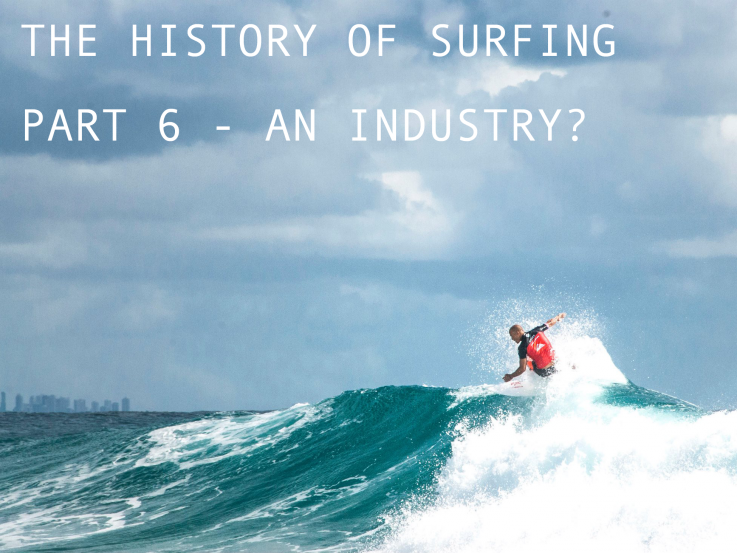 Having been inducted into and largely accepted by mainstream media, surfing was becoming a creature all of it’s own. Surf media had spawned and the 60’s saw one surf magazine after another bloom, blossom and disappear. Despite the high turn over, the momentum created by generation after generation of teens hungry for escapism, connection and exploration, meant surfing was here to stay and it was only going to get bigger. The growth of the surfing industry, general public fascination with the culture and hardcore grassroots devotion all fed one into another.

A tiny teenage surfer girl called Kathy Kohner had exploded into life as ‘Gidget’. She was all about surfing. Her dedication to teaching herself to ride, gain experience and broaden her expertise was all fuelled by a genuine love affair with waves. She was swiftly adopted into the Malibu scene as an honorary bro and they wasted no time fashioning her the nickname Gidget - short for girl midget. This sassy teen with a quick wit and a decent dose of attitude was immortalised in a book written by her father and the masses lapped it up. She personified the teen image of tough but tasteful and embraced the newfound freedom of the era - everybody loved her for it. Unfortunately, the movie version was devoid of the substance found in the book, but no-one cared and she continued to be held up as surfing’s lucky charm.

As the surfing population was swelling to never before seen numbers, balsa wood was getting difficult to find. Shaper ‘wars’ over wood were cropping up as dealers found it harder and harder to source the lighter, straighter planks needed to make the best boards. Whilst a core group of leading shapers spent their time bribing and arguing their way to the best parts of the diminishing balsa supply to fulfil the demand, three surfers were quietly embarking on new territory.

Although foam core boards had been tried previously by Bob Simmons, limited technology and insufficient technical understanding of manufacturing, had written off the use of foam as a flimsy and restrictive material for surfboard making. But just as the surfing industry was growing, so was the understanding of plastic polymers and how they could be used. Hobie Alter and Gordon ‘Grubby’ Clark began secretly experimenting with foam in the hope of outpacing their competitors and revolutionising the industry for huge financial rewards. Instead of competing for wood, they were going to eradicate the need for it. These were high stakes. Life savings were chucked into an ever diminishing pot to work and rework huge foam moulds in a rundown warehouse. There were problems with the moulds blowing apart, air bubbles in the blanks and below par final products. Undeterred, they kept changing the formulas, making new moulds and adjusting their methods, all in complete secret.

Down the road Dave Sweet was doing the exact same thing in his lounge. Sweet had worked for Kivlin and Quigg shaping boards for years and had been instrumental in bringing ‘The Pig’ board into existence. It’s not clear who came first in the race to produce the first polyurethane board. Rumour has it that Sweet agreed it was a tie because his operation was so much smaller, and while Alter and Clark went all out to launch their boards, he was lending his to mates on the beach.

Surfers were slow to jump on the bandwagon though. Most of them said the boards were ugly and others argued they were soulless imitations of their prized balsa boards. But Alter wasn’t willing to give up. He surged on ahead, tweaking his process, and eventually he found solutions to the bubbling problem that produced ugly blanks. Now boards where better looking with sleek clear coats or beautiful coloured patterns. Alter and Clark had pulled it off. Dreaming big and working hard had paid off and now every surfer had a polyurethane board beneath their feet.

Up until the 60’s a surfer’s biggest challenge had been the cold. Those unlucky enough not to be living in Hawaii battled the cold by surfing for as long as they could before bailing back to the beach to a fire, alcoholic beverage, food for fuel and the comfort of a fur coat found in the local charity shop. Once they had thawed their clawed, numb hands, they’d go out for another hit.

Whilst dry suits had been designed for the Navy in the 1950’s these weren’t practical for the surf as the seams leaked in heavy conditions and just being seen in a dry suit once was enough to ruin your reputation on the beach forever. Hugh Bradner, an MIT physicist, realised that it wasn’t absolutely necessary to keep the water out to stay warm. His designs were originally for the Pentagon, who unceremoniously decided to ditch the idea.

Eventually Bev Morgan, both a surfer and a diver, got his hands on Bradner’s research and began putting together front zip jackets for his dive and surf shop. Surfers weren’t convinced and once again shunned the new development, labelling surfers who couldn’t handle the cold as pussys and copouts. Divers weren’t so shy. The suits were unreasonably difficult to get on, needing shed loads of talc to squeeze into, before rubbing their hosts raw with harsh rashes and sores. But divers weren’t fazed. They could score more bounty from their local reefs because they could stay down for longer and that was the price they were willing to pay for it.

Jack O’Neill began making suits out of his surf shop, but again his customer base was largely comprised of divers. Generally, people credit O’Neill for being the original designer of the surfer’s wetsuit but it was actually Morgan who got surfers wearing suits. He offered leading surf shops and shaping bays free suits with their own logo on, in return the shops were to insist their best riders wear them. Once this core group of surfers were wearing suits, everyone was wearing them.

O’Neill had his ear close enough to the ground to be at the forefront of the rise of the wetsuit. He added lining and seam joints to make suits easier to get on, less abrasive to wear and less likely to leak. He was a master of marketing too, stamping his logo wherever he could, whilst innovating to introduce new colours, better lining, less wear and tear and the iconic all-in-one wetsuit. Warmer, more functional and better looking, this suit sealed the wetsuits lasting reputation as a staple for every serious surfer wanting to surf all year round in cold conditions.

Now it was the surf fashion industry’s opportunity to get its share of the limelight. Screen-printed surf logo tees, baggy shorts and custom, super durable surf trunks were storming the market. Every surf shop now had a rack of boards, a line of white tees emblazoned with the shop logo, surf trunks and stacks of surf wax. Not only that, but surf style became a contender in the mainstream fashion world, with big name brands taking elements of the surf vibe into their own collections. Beach style was officially declared beautiful. Surf art followed and what was once considered a hobby, could now actually make you a living.

Surfing contests were also becoming more prolific, bigger and more important. Whilst opinion was still largely divided amongst surfers about the place of competition in surfing culture, there was a general consensus that surfing contests had come into their own. With this incremental shift came the quest to define ‘the rules’. Surf judging still ignited frequent arguments about what should and shouldn’t be scored and where points were to be awarded or docked. Using trial and error, the major contests lead the way in laying down rules by ditching objective surf judging and using subjective criteria based on flow, how close surfer was to the curl and form, as well as the difficulty of the wave caught.

The United States Surfing Association was formed and began the work of enforcing rules and etiquette in a bid to elevate the sport towards a more respectable sphere. They honed the rules and added in manoeuvres, etiquette and critical, high performance surfing to the judge’s standards. Spectators began to attend more events and gradually the draw of competition increased. Still, the best surfer didn’t always win the event, and the majority of the surfing population knew who the best surfers were, despite who was and was not a ‘champion’.

To go with its shiny new fame, surfing embarked on a series of new contests and new ways to recognise its devotees. The Surfer Poll Awards began gracing the best members of the scene with popularity awards. Phil Edwards, a handsome and clean cut, yet semi-rebel surf idol, won the first ever Surfer Poll Award and was also one of the first to be inducted into the newly formed Surfing Hall of Fame.

The combination of more available media, cheaper travel and the storm of creative and progressive development didn’t go unnoticed by the rest of the world. Whilst surfing had already been politely introduced to the global audience, towards the end of the 60’s surfing was being repeatedly catapulted into the faces of the wide-eyed masses. Not only did other parts of the world have surfing communities, but they were becoming hard and fast mainstays of surfing culture. South Africa, Peru, France, Spain, Italy and the UK had surf industries all of their own.

All the while Australia, remote and removed from a lot of popular culture, had taken surf culture to heart and now began to come into it’s own. Previously a late follower of trends, Australian surfers took matters into their own hands and began driving change, and would continue to be a force to be reckoned with in the constantly changing landscape of the surf industry once and for all. Bob Evans moved surfing out of Sydney, showcasing the abundance of waves going unridden up and down the coasts through his movies and legendary devotion to surfing culture. Young Aussie surfers like Midget Farrelly and Nat Young started to dominate the surfing media and competition circuits. Evans was also responsible for the first World Surfing Championships as well as establishing The International Surfing Federation to oversee the event. Now surfers from all the budding surfing communities had the opportunity to surf against each other.

Towards the end of the decade The Endless Summer staring Robert August and Mike Hynson and shot by Bruce Brown, was the definitive representation of what the 60’s surfing boom had been. The ultimate surf movie, all colour and quick wit, centred around the search for the perfect wave. It captured the hearts and minds of surfers and non-surfers alike, taking the box office by storm and bringing in large audiences for months at a time. But the winds of change were unrelenting and within a few years the movie was already outdated as the surfing industry hurtled towards a revolution of a different kind. The short board was about to make an entrance and stamp its formidable mark on surfing history.

This article is the sixth in a series that we are penning about the history of surfing and the surf industry. Stay tuned for the next instalment...