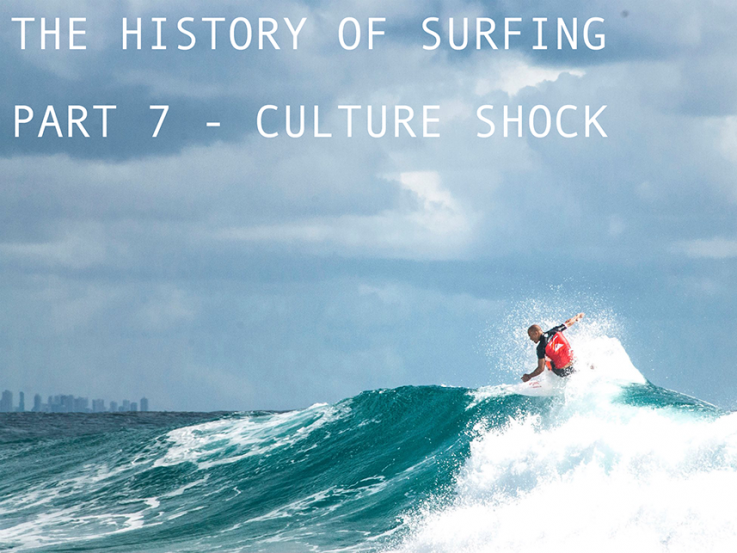 Up until the shortboard was conceptualised, change, although rapid and collaborative, had been linear, one step after another along the road to better riding, perfect style and endless smooth motion. The ideas happening as the shortboard was born, blew the doors and windows out of the entire movement. Surfing was about to get a culture shock… from its own backyard.

The world was experiencing the hippy movement. Whilst surfer’s embraced and embodied this new counterculture, they also lent it an edge. They were more extreme in their undertaking of what it meant to be free. They took the hippy vibe to new heights, but managed to retain their signature attitude, alienation of outsiders and entitled eminence.

Surf media got in on the action, whole heartedly exemplifying this image by portraying drug fuelled, art focused, broad spectrum creativity. Surf mags, which had been based on respectable sporting publications since their inception, threw out the rule book. Now they displayed art, poems, abstract photography, politically incorrect cartoon strips, and anything else they felt visually communicated the giant trip the audience was on. The general consensus was that if it seemed like a good idea after dropping a tab, or three, of acid, then it was printed.

Weed and LSD were becoming widely used throughout the surfing community, with only a few of the top surfers refusing to participate. These members fell out of favour, there was no room for middle ground - you were in or you were out. More than one prominent surfer fried their mind or died of course, but largely drugs were used to intensify what surfing was already about; connection, creativity and open-mindedness.

A surfer and knee boarder called George Greenough was the catalyst for the imagining of the shortboard. The original ‘trust fund surfer’, he dedicated his life to riding waves, travelling, making boards, and designing camera housing, and looked like he lived rough on the beach despite his tidy stack of inheritance.

His surfing style was completely unconventional. He forcefully dug the rail to perform huge banking turns, scoring into the wave face over and over again. He realised first that, in big waves, he didn’t need the extra volume or length of a longboard. His lower centre of gravity allowed him to throw the board around, plough through the face of the wave with power and still maintain stability and control.

He began designing fins based on dolphin and tuna, which led him to question the importance of ‘flex’. He reasoned that if fish moved with the water, a board should follow that principle. He designed short, thin knee boards with raked back fins that allowed him access to parts of the wave few stand up surfers had ever seen, including the barrel. These boards would bend through a turn and then snap back, accelerating forward out of a turn to propel him into the next one. He had speed, power and stability.

Californian breaks were heaving under the weight of surfing’s rise to fame and, rather than battle the crowds, Greenough travelled frequently to Sydney where the breaks were mercifully quiet, surfers were comparatively open minded to new ideas and the surf industry was carrying its new found momentum well.

Here he met Bob McTavish, a well-liked local shaper and surfer who had worked for all of the top shaping bays. They shared a love of board design and new ideas and McTavish was in awe of Greenough’s previously unseen style of surfing. He was plagued by the desire to surf like Greenough, but on a stand-up board. On one trip, Nat Young, an impressive competitive surfer, shared a session with McTavish and Greenough and could immediately see the benefit of shorter boards with less volume. Young, at six foot three, was way bigger than most guys in the line-up, but chopped his board down a foot and cut the volume by a brutal 25%. That year he won the World Championships and several other events with ease.

Watching Greenough surf helped McTavish understand the planning areas of a board. He went home to Sydney and shaped a v-bottom board with a wide, squared off tail, aptly called the Plastic Machine. The v meant the surfer had to drive from rail to rail and the lower speed acceleration spot, moved back towards the tail, cut out shuffling up and down the board for turning. The more he surfed the Plastic Machine the clearer it became that he wasn’t using the nose. His boards became shorter by the day, with thinner rails and only one layer of glass. With these ultra-responsive crafts he was one step closer to his dream.

Meanwhile California was none the wiser to the morphing ideas and crushing of history happening across the pond. Americans weren’t ready to admit the Aussies were way ahead and ignored the comp wins and creativity coming out of Australia. The Aussies passed them as the more progressive nation anyway and the shortboard was quietly launched on Sydney’s Northern Beaches. Although a movie and several contests happened showcasing the Plastic Machine and the new era it represented, the real international debut of the shortboard didn’t happen until they took it to Hawaii.

Still the home of surfing and where every self-respecting surfer went to prove their skill, Hawaii didn’t participate in the mudslinging happening between Cali and Sydney. McTavish and an Aussie contingency arrived in Honolua Bay to sceptical stares and sly smirks. It just so happened that Paul Whitzig filmed one all time session featuring the Plastic Machine out performing the entire lineup. When his film, Hot Generation, was screened it blew every single viewer’s brains out. You couldn’t unsee it.

Dick Brewer, the foremost big wave board shaper, had more than one heated discussion with McTavish before he bought out the Mini Gun, his version of the Plastic Machine. A big fan of psychedelics he worked out of his board room, Lahaina Surf Design (yes that’s LSD for short) in Maui and his reputation saw these new boards flying out the shapers bay. At this point surfing was changed forever.

The broader industry, slow to keep up with the developments, weren’t prepared for the demand. Customers wanted a Plastic Machine or a Mini Gun. Longboards were done and suddenly the floor was wide open to anyone producing a short design. Dimensions fluctuated so quickly and promotional outlets were so slow, that the bigger companies couldn’t keep up. Trends came in and out in the time it took to roll a joint.

Experimentation was back and fin design followed suit, with every possible type of tweak being tried and tested. Backyard shaping bays were everywhere, the market was hungry for new and cool and, slowly but surely, the board manufacturing industry began to crumble under the weight of ‘different’ and ‘progressive’.

The Californian surfing scene wasn’t far behind it. A changing and industrialising coastline, combined with arriving late to the shortboard party, a growing distaste for commercialisation, and a talent drain across the North Pacific to Hawaii, was enough to evaporate any signs of the boom years.

Harder to learn, progress and perfect, surfing was much less alluring. Where skilled surfers had been able to make a difficult thing look effortless, beautiful and graceful, the new boards gave away how hard surfing actually was. Cold water surfers had previously relied on a good amount of volume in their boards to stay out of the water.  Now they were submerged and freezing. For the first time in a long time, the surfing population went into decline.

Californians weren’t the only one’s leaving the big city. Sydney sliders were turning their backs on consumerism and moving to the country. Soul surfing was becoming a thing. Although nobody really knew how to clearly define a ‘soul surfer’, this grassroots movement was spurred by surfing for surfing’s sake. Nat Young, widely considered as an arrogant, competitive sell out, moved to Byron Bay, lived off the land and surfed for the love of it. If anyone needed proof consumerism was passé, that you could live a fulfilling life full of waves without commercialism, this was it.

Alby Falzon’s ‘Morning of the Earth’ embodied this sentiment. It personified the idea that surfing was more than a ‘sport’. It demonstrated that surfing, this multi-dimensional, many-faceted, monolith of counterculture, was worth revolving around.

Meanwhile Australia was taking ownership of performance surfing. Doug Warbrick and Brian Singer started Ripcurl Surfboards. Their mate Andy Green suggested they make wetsuits and they swiftly became Australia’s biggest wetsuit manufacturer. Green started making ugg boots (short for ugly) and boardshorts for them, covering the winter and summer trade. He renamed the line of shorts Quiksilver and came up with the wave over the mountain logo.

Eventually the two companies parted ways. Quiksilver came out with cooler, more comfortable and functional Velcro fastening boardshorts, just as the American surf brands sold out and the market went crazy for authentic Australian made goods. Both companies shot to fame and fortune. Competition between the shapers was intense and building and this held the pace of design advances at break neck speed.

In Hawaii shortboarding was further developing. Style became smoother and more refined and this, together with an incredible natural backdrop and glassy waters, meant Hawaii remained the most showcased surf destination in the media. Unsurprisingly, it was here that tube riding would be established as the ultimate manoeuvre. Old fashioned equipment had previously made riding the barrel of a wave off limits to most surfers. But shorter, faster boards and a little known wave on the North Shore were about to place tube riding on its righteous throne.

Depending on who you talk to, Butch Van Artsdalen was the first person to get properly barrelled at Pipeline, disappearing behind the curtain and getting spat out clean. Pipeline was duly destined to become the most photographed wave of all time. And whilst Dick Brewer refined tube riding boards, it was Greenough who filmed a POV tube for the first time and audiences couldn’t get enough.

Enter Gerry Lopez. Now the surfing world had fallen hard for shortboarding and the tube ride, here came Lopez to explain the entire revolution in one intensely cool slide. He took performance to a new level and put his own stamp on cool. He was the definitive soul surfer. Managing to walk the delicate line between commercial success and embodying the down to earth soulster, he helped the surfing industry understand itself.  Sure profit was fine, but surfing came first. This became a universal mantra; it was the best and only way for the surfing industry to reconcile with itself. And so a new chapter had begun.

This article is the seventh in a series that we are penning about the history of surfing and the surf industry. Stay tuned for the next instalment...