The History of Surfing - Part 9 - Trust The Thrust 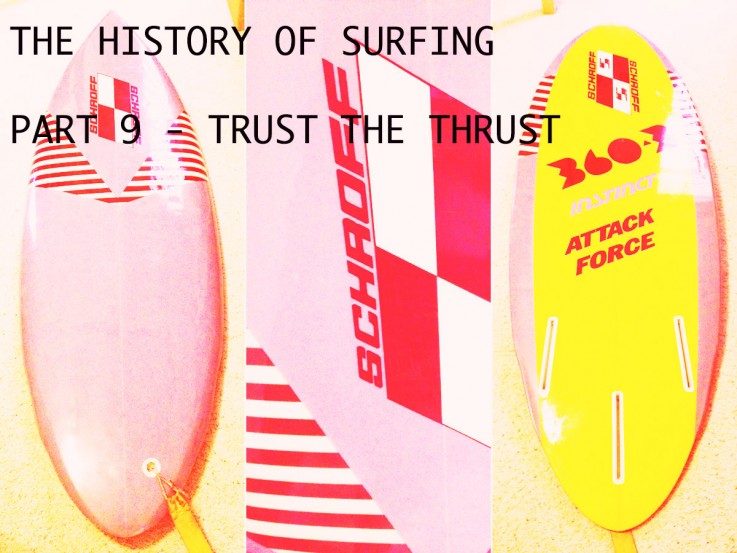 Up until the 80’s, surfing culture, its meanings and associations, had been rapidly evolving with each new generation. It’s hard to say which era of surf history is more important as far as progression is concerned, but the 80’s was by no means the shrinking violet. If anything, it was a neon gloved upper cut to the jaw.

Enter Simon Anderson. It’s 1981 and this huge hulk of a surfer, taller and far heavier than his counterparts, is searching for a board that won’t twitch beneath his yeti-sized feet. A keen shaper and a top ten professional surfer, he was experimenting with designs that might give him a competitive edge.

His old mate Frank (Williams) showed him a design incorporating two tiny trailing fins. Anderson swiftly adapted this set up by adding two longer side fins and giving the centre fin a hair cut. He then shaped the nose into a point, thinking that less surface area might make it handle better. He was right. The board planed like a twin fin, but had the traction and drive of a single fin. The Thruster was born.

He was by no means the first person to try the three fin set up. Dick Brewer and Reno Abellira had a version in the 70’s with a long single fin and two trailing finlets. Malcolm and Duncan Campbell had tried a shorter centre fin and two long keel fins either side, but neither really caught on in any meaningful way. Neither were about to radically influence the entire surfing world.

Anderson was well liked and garnered a certain amount of respect within the professional surfing microcosm, but when he took the board to America, not a soul was interested in his latest creation. Feeling like there was only one way to get the attention the stick deserved, he came out of retirement to take on the professional world tour once again.

Knowing the craft under his feet was superior to the twin fins everyone else was riding, he made short work of winning two events in a row. He out performed the entire field in huge waves as well as waist high mush. Just for good measure, at Bells he proved that three fins allowed the surfer to gain speed through the top turn. This had never been seen before.

For some reason Anderson didn’t patent the set up. By 1983 the tri fin was the standard on the majority of board models. He had ditched the tour, choosing to shape boards instead. Anderson missed out on continuing his competitive edge or any profits from his invention. Although he later acknowledged that it sucked not to make his fortunate, he also pointed out that no surf innovation had ever been patented up to that point, describing the industry as 'an open source of innovation and technological advance, driving the evolution and improvement of surfing'. Admirable to say the least.

Outside of the professional circuit, the surfing spectrum was once again in flux. Some were giving up surfing all together, because, well, shortboarding was a lot of hard work! Yet more were migrating back to longboarding.

Longboarding made the most of small waves, so it was more fun and easier to master than shortboarding. Not everyone lived by waves big enough to ride short boards properly and so it began to rise from the dead.

This resurrection prompted a longboard division to be added to the US Open. Whilst select few surfers became dedicated longboarders, it was mainly seen as something shortboarders did when it was flat. California saw the potential of the newly formed movement and reformed it's surfing culture around longboarding, it's laid back vibe and friendly demeanour. Luckily for them it gained traction and some of the old clubs reopened.

Along with the re-emergence of the classic longboarding style from the 60's (dude's with beards riding single fin logs) came a newer style. Lighter tri fin models were being ridden in a cross pollinated mutation of old school longboarding and fashionable shortboarding.

Fun was back on the agenda. People were longboarding purely because it was enjoyable. This started to erode some of the seriousness that had begun to choke the popularity of surfing. It helped to lift California away from its reputation for violent localism, anti commercialism and stoic soul surfer–isms.

A friendlier, more community focused deal, that involved talking, board swapping and ride sharing developed. What's more you didn’t have to be in shape to enjoy it. Weekend warriors were back in business. Nostalgia tinted the lens of longboarding and 'vintage' became a thing. Old boards and old surfing greats became valuable and labelled ‘legends’.

Just as it looked like everything was too good to be true, the revival was met by a hefty backlash. In an already crowed lineup, the size of the boards meant any stylish Grandad had a higher wave count than most.

Longboarding was fun because it was easy. Now shortboarders, having put in the hard yards to become half decent surfers, were being steamrolled by balding middle aged men. These dudes had what shortboarders deemed to be an unfair advantage. The differences between shortboarding and longboarding became a great divide, with more than a few surfers claiming shortboarding was a higher form of wave riding as it took substantially more time and effort to master. Of course, in true surfing community style, this opinion differed depending on who you spoke to and what they rode.

Meanwhile a new set of pros were moving up the ranks. An interesting dichotomy occurred at the apex of this burgeoning era. While Australia's Tom Carroll burst onto the scene, all bright boards and intense power turns, his polar opposite Tom Curren, a quiet Californian, enthralled everyone with his flow and technique on muted white boards.

Carroll was talented from a young age and came up through the junior circuit, winning the Sydney championships on his way. He cemented his reputation in Oahu at Sunset Beach and Pipeline, his small frame lashing out continuous power turns and incredible speed.

He was (probably) the first professional surfer to really commit to land and cross training to improve his fitness in the surf. He was popular and known to enjoy a few beers with the lads. Despite his obvious talent, his sponsor Quiksilver eventually dropped him due to lack of results. It was then that he fully committed to rigorous training, began practicing tactics and embraced a healthy lifestyle, eventually earning two back to back world titles.

Australia was still leading the charge within the surfing industry. Ripcurl had established itself as the wetsuit manufacturer of choice, while Quiksilver expanded, founding licensees in Japan, South Africa, France and Brazil. Aussie magazines were now considered the best in the business by a sizeable margin.

At this moment in history, the depth and variety of talent coming out of Australia was unparalleled. Tom Carroll, Gary Elkerton and Mark Occhilupo (Occy) were the strongest of the stream, all of them loud and unapologetically colourful. Occy was untouchable when it came to flow and power. His spontaneous style coupled with an ability to push the boundaries of a manoeuvre. There was relatively little warning of his arrival on the scene. To onlookers, it seemed that he just stepped onto the beach one day and blew everyone out the water.

Tom Curren, whose Dad was an American board shaper and 50’s big wave icon, was the opposite to every Aussie pro. He was quiet, withdrawn and chose to travel alone. Single-handedly, he was beginning to turn the tide of the Australian domination in professional circuit.

Curren would eventually win back-to-back titles, retire, then make a come back. He seemed burnt out by the tour, but his competitive career was never what defined him or his legacy. His unique style and form changed that of surfers everywhere. He managed to combine vertical attack with elegance and was incredible to watch in all conditions.

California did it’s best to hitch a ride on Curren’s success. There were slogans everywhere layering on the patriotism thick. He was labelled as having Californian soul, personifying the ultimate Californian surfer. In actuality he rarely talked to anyone about his home country and choose to live in France full-time.

California benefited from Curren's success but he wasn't the only surfer there to make his mark. Brad Gerlach, won several world tour contests, eventually reaching second on the world tour. He was quoted as saying that coming second destroys a man's soul. Despite this, or maybe because of it, he eventually remade himself as a big wave surfer and continued to have a successful surfing career.

Kim Mearig (Curren's school classmate) won the women's world tour in 1983. Both Curren and Mearig got their boards from Al Merrick, who was helping to rebuild California’s surf industry along with Gary Linden and Rusty Preisendorfer, Occy's shaper.

As the eighties charged ahead, Tom Carroll and Tom Curren battled it out, representing two sides of the same coin. The newest, hottest talent on the tour, their dimetric styles of attack were closely watched. Together they represented the future of high performance surfing.

This article is the ninth in a series that we are penning about the history of surfing and the surf industry. Stay tuned for the next instalment...