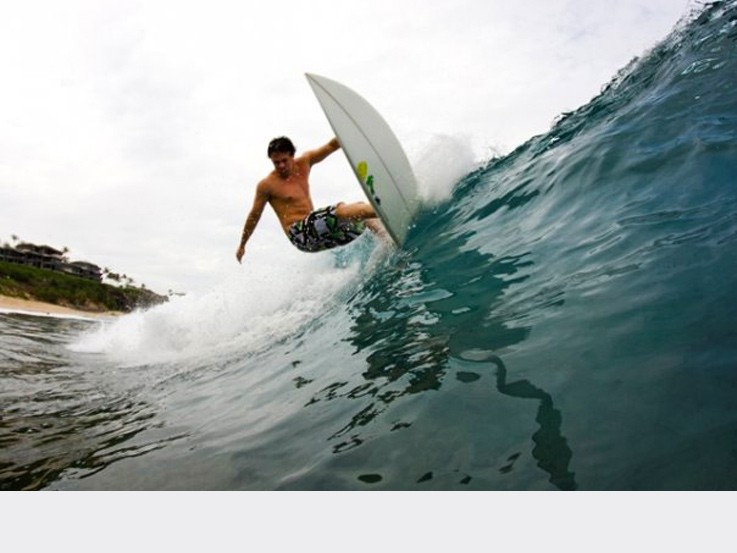 Where and when did you learn to surf?
San Clemente Pier. I would have been about 13 or 14 so 1996-97. My friends and I were obsessed with ...lost's 'What's Really Goin' Wrong?' so at the time we thought SC Pier was the end-all, be-all venue for high-performance surfing. I'm pretty sure I learned how to do a chop hop before a bottom turn which, in hindsight, is some shameful shit. However, it was a cool experience to watch the film and then go out and see guys like Cory Lopez and Chris Ward tear apart the Pier. From there, we expanded out to 204s, Strands, Salt Creek to the north and T-Street, Rivis, State Park and Trestles to the south. Southern Orange County has always been fertile developer of world-class talent and when you consider the wave options that surfers down there have, it's easy to see why.

When did you get your first Surfboard?
Would have been around the same time. It was a 6'2" Terry Senate-shaped Infinity double-wing,swallow-tail with Rastafari spray. That was a pretty good board.

What do you love about Surfing?
I think people love surfing for different reasons which, in itself, is probably a reason to love it. I love it for lots of reasons as well, but chief amongst them would be because of progression and redemption. Surfing, for me, is one of the most progressive things you can do in the sense that you can never master it - I learn something new about myself and about my surfing every time I paddle out. I guess I consider it redemptive as well because every wave provides an opportunity for change. You can change your outlook, your session, your day, change your year and change your life - the opportunity to accomplish comes with every set.

Where is your favourite place in the world that your job has taken you?
I'm very fortunate to do what I do and travel for a living. The ASP has taken me all over the world and I'm very grateful for the opportunity to not only see the world's best surfers do what they do on the world's best waves, but also experience different cultures as well. It's hard to pinpoint one place as my favorite. We don't go anywhere that sucks - Australia, New Zealand Brazil, Fiji, Bali, South Africa, Tahiti, the US, France, Portugal and Hawaii. They're all beautiful, they're unique and I've been traveling there for a few years now so they all feel like home to me. I have great friends in each place that I consider family and tremendous respect for the cultures and world-class waves they each possess.

What sort of education have you had?
I completed my undergrad degree at UCSB where I studied English Literature, Global Studies, Professional Writing and Spanish (did a stint studying Criminology at Bond University on the Gold Coast as well). I started a graduate degree in Communications at Cal Fullerton, but had to put that on hold when my travel schedule for work increased. I'd like to go back and continue with that if the opportunity presented itself though. Working in media and communications over the last seven years has been a pretty interesting education in itself in that the landscape has evolved so much with the rise of the Information Age and the advent of digital media. I've been fortunate enough to have the opportunity to test theories learned in academia in the real world practice. I'm a firm believer that growth, both academic and professional, is never complete.

What was your very first job?
I worked in receiving at Rip Curl Surf Center in San Clemente - which is another way of saying that I signed for all the product shipments, took inventory, price and security-tagged the merchandise and prepared it for the floor. I would have been 16 when I got the job from Isaac Kirkpatrick and the people that worked there at the time were all amazing people. Surf retail in the late 90s was still very much about hard goods - surfboards, wetsuits, accessories and people bought the clothes because they believed in the product - a product that gave them an enhanced surfing experience. The industry has changed significantly since then, understandable when you start breaking down margins and whatnot. I'm still very thankful for that first job at Rip Curl though. I learned a lot about the sport and culture and hard goods products and just about treating people with respect and ensuring that they're getting the best of you. The guy who succeeded me in receiving, Cory Fowler, is still a really good friend of mine and now manages the shop. He's kept it core and soulful and I still pop in there every time I'm in town.

What is your current job and what does it entail?
I'm currently serving as VP of Communications for the ASP. It's an interesting job that inhabits a few different dimensions and departments at the moment. The broad stroke directive is to ensure the story of professional surfing (the athletes, the events, the tour, the culture of surfing) is being communicated to the public through all available mediums and with top-of-class quality. My day-to-days are somewhat irregular but there is consistent engagement and communication with our athletes, fans, events, the media and my colleagues at the ASP. Since the acquisition of the ASP in December of 2012, the individuals that have been brought into the organization have been really impressive. They're all incredibly passionate about surfing and are tremendously talented and experienced. They're going to accomplish some really great things for surfing and it's exciting to be a part of.

How did you get into the position you are in today?
When I graduated from school, I went back to Rip Curl to work and figure out what I wanted to do. I started freelancing part-time for Surfing Magazine under Evan Slater - which isn't necessarily something I ever envisioned myself doing, but was really enjoyable, educational and I found that I had a mild penchant for it. While working at Rip Curl and ING, I took a unpaid, telecommute internship for the ASP Media Department. I thought it might look good on my resume and had always been a fan of the ASP. Since I can remember, I have always been a disciple of Wayne "Rabbit" Bartholomew's vision: get the best surfers you can find, put them in the best waves you can find and that's a pretty good formula for seeing something special. The internship went well and I was hired as a regional media asset in North America. That evolved into a more international role with a focus on women's surfing which evolved into a more overarching role across all media. Since the acquisition of the ASP in December of 2012, our resources have been significantly and thankfully bolstered and my focus now is on strategy, messaging, press relations, amongst other things - basically ensuring that the story of professional surfing and its athletes is being told to the world.

What is the best thing about working for ASP?
As a surfer, it's witnessing the world's best surfers performing at the highest levels in the world's best waves. It's a huge privilege and honor to be a part of it. As a human being, the best thing is the people we get to meet along the way - surfers, fans, colleagues, just people living their lives.

Where do you see yourself in 10 years?
I'll consider myself a very fortunate person if I'm still in a position where I regularly get to witness the world's best surfers perform magic in the water. I'd like to think that, by that time, I would have had a hand in transforming the general public's perception about the sport and regarding the men and women of the ASP World Tours as the world-class athletes they are. Objectively, and I pride myself on being able to remove myself from the situation to make these calls, the ASP Top 34, 17 and BWWT surfers are some of the most impressive and inspiring athletes on the planet. As surfers, we should all recognize and take pride in this.

Where can we find you online?
A general note on my digital identity: I'm a firm believer of promoting the athletes, events and their accomplishments over myself - I find them exponentially more interesting than myself. Also, I spend a good chunk of my professional life on the computer so I've made a conscious effort to retain my identity for the physical world as opposed to the digital. That said, I may be on twitter or instagram in the coming months so that fans and critics have an opportunity to engage in dialogue on the sport. If that occurs, I can't imagine it being a red letter day in anyone's calendars but I'll do my best to keep you posted all the same.