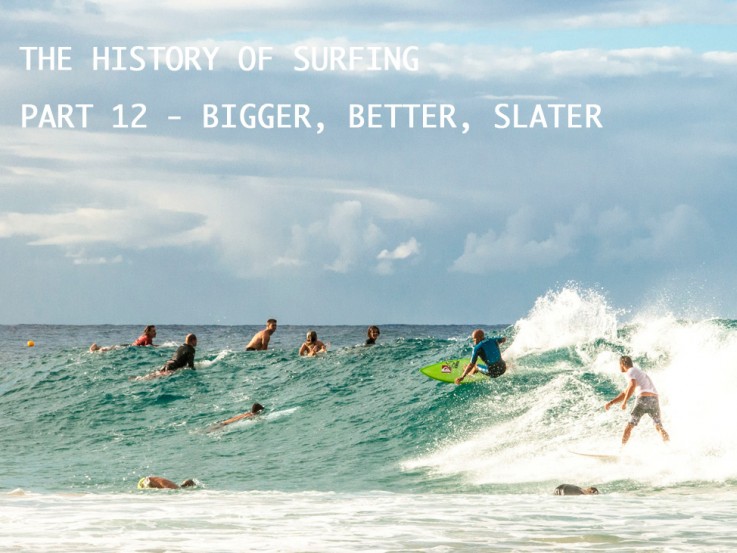 The History of Surfing

In 1985, a Floridian graced the surfing scene at the junior US open and took the championship title. Kelly Slater was setting himself up for the most successful professional surfing career of all time. He didn't just out-do his contemporaries either, he relentlessly smashed records. He won five consecutive titles in the 90's, breaking Mark Richards' record, currently has 11 titles to his name, is both the youngest and the oldest surfer to hold the world title, and as if that isn't enough he's the popular kid too, collecting 19 surfer poll awards in 21 years.

Slater was a new type of champion. It seemed nothing phased him. By age 19 he was dubbed the most progressive surfer in the world. At this point in time, power surfing was the fashion. Sure Slater had power, but it was more than that. He invented new ways to surf a wave. He could let the fins loose over the lip, drift ethereally through turns, perform aerial manoeuvres on a whim and possessed a freakish flexibility that allowed him to contort his body into new places in the tube.

Along side Slater, Rob Machado, Shane Dorian and Shane Powell were coming up the ranks, each with their own unique style and philosophy. They were predictably branded the 'New School'. Slater was by far the most influential, and at a tender 20 years of age he was the youngest mens world champion ever.

In 1993, knee surgery prevented him from competing but he returned in 1994. He out-performed the entire draw in an unprecedented winning streak of five world championships in a row. He became the face of the surfing industry. He was authentic and appeared independent, avoiding controversy thanks largely to the fact he was usually the best surfer in the water.

Slater allowed the adoring masses into his personal life. He talked frankly about his alcoholic father, struggling single mother and faltering love life. He towed the corporate line too, only damaging his sizable cred when he briefly took an acting role on Baywatch.

Slater took a brief retirement but after three years off the tour he backtracked. He was 30 at the beginning of the 2002 tour. A fresh generation of surfers ten years his junior were now ready to compete. Australia continued to dominate, producing Mick Fanning, Joel Parkinson and Taj Burrow. CJ and Damien Hobgood came out of Florida. Bruce and Andy Irons emerged out of Hawaii. Bruce was considered the most naturally talented, but he lacked competitive drive. Andy may not have had Bruce's finesse, but he made up for that with a colourful and imaginative riding repertoire. Andy's struggle with alcohol and drugs has been well documented, but he was still one of the best and brightest surfers of his generation.

In 2002 it was Andy that squared up to Slater. Irons dominated and took the title, whilst Slater failed to win an event all year. Defending his title in 2003, Irons surfed out of his skin straight from the start, but Slater had found his form. An gripping rivalry blossomed. Going into the final event of the year they were neck and neck for the title and everyone got the showdown they wanted. Iron's stole the show and won. 2004 was a less exciting exchange, with Iron's again dominating the entirety of the year and taking the title.

Everyone now believed Slater was passed it. They couldn't have been more wrong. He won four of six events in 2005 and secured the title before the tour had even rocked up to the final event. 2006 saw him take control of the title straight out of the gate, monopolising the top spot all year. In 2007 Mick Fanning took the prime position. Slater doubled his efforts and ended 2008 having won 90% of his heats. At age 36 he went on a winning spree unparalleled by any other surfer. He appeared unbeatable and ageless. Irons remained in the game for a while before dropping off the circuit, claiming burn out. Through the sheer scale of his success, Slater elevated himself onto an untouchable pedestal. He was now incomparable to any other surfer.

In the background, big wave surfing had slowly been gaining popularity. Hawaii was considered the ultimate big wave haven. It had the best geographic position, cultivating perfect conditions. Although only a tiny collection of people actually took part, almost every surfer and hoards of fans were watching.

Jeff Clark had been riding a big wave called Maverick's, south of San Francisco, for nearly 15 years. He regularly invited people to join him but Maverick's was a hard wave to ride. A cavernous bowl section right at the start, meant dropping in had to happen further down the wave in order make the drop. The impact zone, lined by jagged rocks, also borders a stretch of ocean known to have the highest concentration of great white sharks in the world.

Maverick's was showcased occasionally by surf mags. Hawaiian big wave surfers began to show interest and travelled to San Francisco after a swell had hit Hawaii. Brock Little, Mark Foo and Ken Bradshaw were top Hawaiian big wave surfers and Bradshaw, having been to Maverick's before, encouraged the others to check it out. In 1994, one of the longest big wave swells was pumping so the world was watching. The New York Times covered the event with some of the most extreme wipeout pictures anyone had ever seen.

On a fairly tame day of 15 foot waves, Mark Foo died after a seemingly uneventful wipeout. It's believed his leash caught on the ocean floor and he drowned. A group heading out to the line-up found his body and tried to revive him but he had been dead for two hours by this time. It seems everyone had been watching two surfers struggle to get out of the rocks and tragically no-one had seen he wasn't in the line-up. His death sent shockwaves through the media, giving the sport its biggest audience yet.

Generally people involved in big wave surfing believed 30 feet was the maximum height of a ridable wave. The speed needed to catch a beast this size was immense, paddling out was a life and death situation in itself, and equipment had to maximise paddle speed, which meant a kamikaze style ride once up and going.

Towing in had been suggested and tried a few times using various set-ups since the mid 60's but it was always a novelty. In 1992, Hawaiian surfer Buzzy Kerbox used rope on a zodiac to tow Laird Hamilton and Darrick Doerner into 15 foot waves at Backyards. This crew developed the tow in technique and pioneered surfing and driving in teams. Tow in was unlike any previous form of surfing because it required planning and teamwork.

This time it caught on. The photo coverage was incredible and anyone associated with it gushed about the experience. Originally, the purpose was to beat the crowds plaguing Hawaii's breaks. This new method upped wave count and was less dangerous because, if the team were skilled enough, they could time it so that the surfer finished the ride, manoeuvred towards the boat, picked up the tow rope and headed back out to the lineup still standing.

They worked on technique and switched to using jet skis whilst preparing to ride a big wave off the coast of Maui called Jaws. This wave isn't considered as hardcore as Mavericks because of the climate and conditions. Jaws is inconsistent and prone to wind, but on it's day it produces a perfect, huge wave. Mavericks and Waimea both have difficult sections because of the shape of the reef. But Jaws is a perfect wave in macro. Jaws' 'biggest day' overtakes the others by a long shot though.

Tow surfing changed the big wave surfboard because paddle speed had been the main focus of design. Laird Hamilton and his mates came up with a new design that was ultra short, narrow and thin in comparison. They added foot straps and made it heavier to allow the surfer to navigate over bumps and sections and cleave along the face of the wave. Now the surfer didn't just gun it to the channel, they could actually turn on the face. Not only that but monster barrels became accessible.

Now size mattered. Throughout the 90's the founding members of tow in, took turns to hold the title of biggest wave ever ridden, although none of them ever bragged about it. In 1998 veteran big wave surfer Ken Bradshaw rode a wave so big that no-one wanted to say how big it was. As he set the line for his bottom turn the waves height was roughly 70 feet. Because it was captured on video people estimated Bradshaw's height and then calculated the face of the wave with this estimate as a measure. Some people considered 70 feet to be more than a little shy of the mark.

Laird Hamilton was considered the best big wave surfer of this era. He was a leading surfer on the North Shore but never wanted to compete on the tour because he wasn't interested in surfing sub-standard waves. Instead he chased adrenalin hits wherever he could and became an accomplished waterman whilst he was at it. He relentlessly pushed the boundaries of what was possible in the water, innovating new equipment, new styles, and new sports. He became world famous for his efforts, producing pictures and video showing him achieving the impossible.

As the surfing industry joined the digital age and began capitalising on its growth, so too emerged a contradicting movement. The retro trend was gaining traction. It was another manifestation of the historic ideology surrounding returning surfing to it's roots. This time however it wasn't about nostalgia. Instead it was a much needed diversification from the constant stream of competition, aggression and capitalism.

Regular surfers didn't want to surf ultra small, thin, narrow boards or buy them every six months. It wasn't fun and a lot of time was spent just trying to catch a wave. Under the retro banner board design began to shift and change. You could find a board that suited the way you wanted to surf. Creativity became part of the mix again.

In 2005 the world's biggest foam core provider, Clark Foam, went out of business. Although the board making industry effused doom and gloom predictions, the void was eventually filled by Asian suppliers, which despite talk of the 'death of traditional surf board manufacturing', had little lasting impact. But during the lack of supply a few minds were opened to alternative materials and although no 'green' alternative has caught on in any major way, surfers and the surfing industry are collaborating to innovate and a have less impact on the environment.

Surfing is now happening in Iraq, Russia and Scandinavia. A global frontier. Fans can tune into the tour from anywhere in the world via internet streaming. Some pros are riding boards made in alternative ways with new materials. Women have more tour dates and media coverage and several of them have a solid air game. You can be a famous surfer and not be on the world tour at all. Essentially, you can be anything you want to be and be a surfer.

Surfing, the surf industry and the scene has changed unrecognisably since we began all those centuries ago. And depending on your perspective, the why and the how of history might be completely different to the surfer sitting next to you. One thing is for certain though. Every surfer loves to surf. Every surfer throughout time has shared this love. Every surfer sits and waits for the next pulse of energy through the water to propel them towards the shore. That is unchanging, constant and shared, and always will be.

This article is the tenth in a series that we are penning about the history of surfing and the surf industry. Stay tuned for the next instalment...